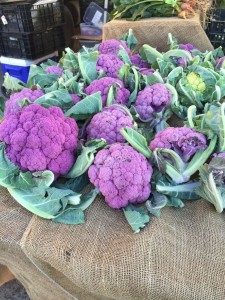 “Act of God,” is what Produce Alliance recently posted about cauliflower, “DEMAND EXCEEDS SUPPLY. We are seeing high prices and NON-EXISTENT supply. The crops in Yuma are very slow and the cauliflower growth rate is slow.”

Since 1996, Produce Alliance specializes in providing distribution services and fresh-produce procurement to clients in the foodservice industry across mainland U.S.

“I just paid $9.99 for a head of cauliflower in New York City!!” posted carolerene on the Reddit website.

Others from different states, on the same thread which started approximately a month ago, weren’t so fortunate, and ranted that their local stores did not have the vegetable in stock.

San Diego on the other hand, has plenty of cauliflower.

San Diego Markets brings local farmers’ directly to the community, via their weekly street-markets, which set up in North Park, Little Italy and Pacific Beach.

At the Pacific Beach Tuesday Farmers Market on Jan. 12, three of the vegetable vendors present had organic cauliflower in stock.

“Prices are high because of the weather. Cauliflower got a late start this season because of the dry and hot weather in August and September, when cauliflower begins to be planted in California,” said Robin Taylor, the co-owner of Suzie’s Farm in Imperial Beach, “and then the freezing temperatures starting in December extended the growing time from 90 days to 120 days.”

“We sell them in a case which either has 9, 12, or 16 heads and the case is the same price, just the number of heads is different, said Taylor. “At the lowest of the market is could be $18 [per case], and the highest it could be $60 [per case]. The prices change daily when there is this much demand.”

Yahoo (finance) relayed similar numbers by posting the USDA chart on their website on Christmas day 2015, which showed that cauliflower wholesale prices have almost tripled from the summer just months prior, to winter 2015.

White added that the farmers that sell at her weekly markets, grow cauliflower locally in San Diego County and North County, and that the national pricing information is based on single-crop growers in Yuma, Arizona and the Imperial Valley.

Goyo Rodriguez from JR Organics, trekked in from Escondido to also sell in Pacific Beach, he stated that his organic cauliflower has jumped approximately from $3 per pound to $4 per pound since last year. For the local low-carb foodies, that extra dollar per head will add up quickly, as cauliflower is a common substitute for rice to many on the Paleo and Atkins diet regimens, because the vegetable can be chopped into small pieces that resemble the feel of rice, with way-less carbs and plenty of Vitamin C. Across from Rodriguez was the Masala Cottage booth selling Indian food, including Aloo Gobi, a vegetarian curry in which they utilized cauliflower as the main ingredient for $7 per serving.

“This [national shortage of cauliflower] will all change shortly,” said Taylor, “since Holtville California, where a majority of the cauliflower is planted, will start harvesting.”

Written & Photographed by Mike Madriaga
Published in the San Diego Reader on January 14, 2016 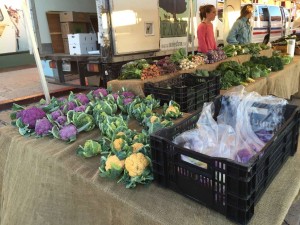 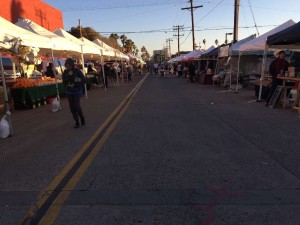