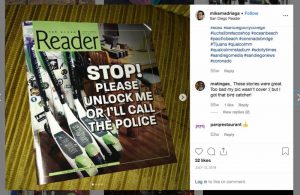 The original story was featured in the print edition of San Diego Reader on July 12, 2018.

You won’t get rich charging Bird scooters either
“I’m telling you as a resident over here [in Ocean Beach], that you are in my parking spot,” yelled a man captured on video.

“I’m not the one that puts these [Bird motorized scooter] nests here,” said Roach, a Bird charger who was filming the irate man.

Roach and her girlfriend Amy encountered the angry OB neighbor by Saratoga Avenue, while picking up a Bird scooter on June 7 at about 9 p.m. (The two requested that I change their names for the story.)

“Some crazy guy threw the Bird scooters on the asphalt saying ‘Get these out of here’ and some other guy had to come to our rescue and said ‘It’s not their fault they are [Bird] chargers.’”

The Bird company pays chargers like Roach and Amy, $5-$20 per scooter — but there’s a catch ….

False alarm brings out police ingenuity
On the morning of October 24, Sam saw a photo tweeted by John Gibbins from the U-T. The photo depicted two San Diego police officers propping up yellow police tape on two Bird motorized scooters on B Street; it was captioned: “UT building 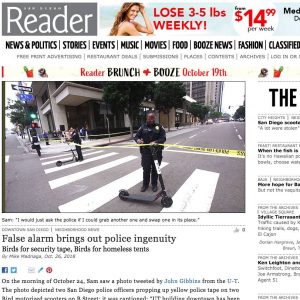 The original story was featured in the print edition of San Diego Reader on November 8, 2018.

downtown has been evacuated after suspicious pkgs found at entrance. State [Senator Kamala] Harris and SDFD has offices in bldg also. Bomb squad at scene.”

“If it was one (Bird) that I was after, I would just ask them (police officers) if I could grab another one and swap one in its place,” Sam said.

Sam, a Bird mechanic and charger, was picking up Bird scooters on F Street and loading them in the back of his Jeep a few blocks away from where the bomb-scare happened on 600 B Street.

“I’m not hating on the way people are using the Birds,” he said.

“I’ve picked up a Bird that was painted like a candy cane and another one covered in barnacles. If people wanna do goofy stuff with them, I think it’s hilarious.”

Steven works by 6th Avenue, up the street from the U-T building ….
Click here to read the full article.

“Dang, they gotta commercial for kids,” he said. “Notice the scooter in the commercial [resembles] a Lime-E scooter.”

The one minute cartoon commercial, posted by The American College of Emergency Physicians, is a public health and safety campaign to push scooter riders to ride safely.

“…. Emergency physicians are seeing an increasing number of scooter-related accidents and injuries,” it says underneath the video. “The number one thing you can do to avoid serious harm is to wear a helmet.”

“But …. I thought kids were not allowed to use these motorized scooters ….

The original story was featured in the print edition of San Diego Reader on February 7, 2019.

“I yell at them motorized scooter and bike riders to get off the sidewalk,” she said, “I have been known to stand in the middle of the sidewalk, hook my cane into the the wrought iron fence and hold it with my left hand in front of me. Like this. I will block the sidewalk and tell them to get back onto the street and what they are doing is illegal.”

Marie, 62, has grown tired of the motorized scooters and share bikes left on their sidewalks; so much that she used to lift and walk the scooters and bikes across the streets on a daily basis — until she sustained some injuries.

I spoke to Marie at her home on Grape Street between 30th and Fern.

“I move them by the Discover Bike rack in front of Target (kitty-corner from the plaza) or on the other side of Grape Street,” she said. “About three months ago I was moving a Bird off of our Grape Street plaza and as I put it down across the street, the back wheel bounced up and the kickstand came right down in the middle of my foot and broke my [toe] bones; there’s still like an [indentation] in my foot — look ….

Scooters on the Coronado bridge

On November 12, Steve Paen saw a photo of two people riding Lime scooters on the Coronado Bridge; he wasn’t impressed; he’s seen this before.

“These riders were heading into Coronado,” he said. 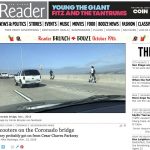 The original story was featured in the print edition of San Diego Reader on November 22, 2018.

Last month, Paen who works at McP’s Irish Pub on the island, saw a larger group of motorized scooters on the two mile long bridge.

“I wish I would’ve been able to snag a picture,” he said, “but I was just trying to abide by the ‘hands-free’ law while driving. On October 4 at around 10 as I was heading into work, I saw what looked like seven or eight kids riding Lime scooters down the Coronado Bridge in the slow lane and heading inbound to the island. They didn’t seem fazed at all with the cars whizzing by them. I can only imagine the max speed on those things is 15 mph, but put against me traveling at 55-60 mph: it’s not very safe for both the scooter gang and [us drivers] having to share the freeway …. 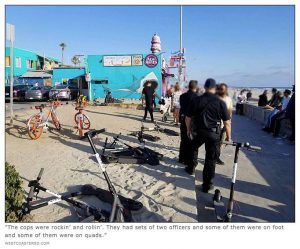 The original story was featured in the print edition of San Diego Reader on June 14, 2018.

Bird traps out all weekend at Mission Beach
“A guy came into our store and said he got a $300 ticket,” Judy said.

Her 18-year-old co-worker Corey Winkle confirmed. “Everything that’s motorized requires a helmet,” he said, “and another thing is that the Bird [motorized scooters] and some of the scooters that we have here, go above the [8 mph] speed limit and that’s another cause of getting ticketed.”

Both work at the Mission Beach Rentals at Belmont Park, which is about 50 feet away from Ocean Front Walk in Mission Beach.

Over Memorial Day weekend, motorized scooter operators received citations from the San Diego Police Department — along some of the 3.5 mile concrete walkway that spans from South Mission Beach to North Pacific Beach and adjacent streets.

“There were Bird traps out all weekend,” Heather said. “I walked by a few, on Mission Boulevard; one in particular besides Open Bar where there’s an enclave where he (a police officer) was hiding; a lot on Garnet Avenue and Cass Street; and they were all ….

Bird scooter smashes BMW on Mission Blvd.
On June 15, Seda Onek spoke to the Bird company in Santa Monica in hopes to square up on more than $1600 worth of damage done to her 2013 BMW 328i on Memorial Day weekend.

“They’re giving us the run-around,” Onek said. “I have informed Bird that I would be pursuing legal action if we can’t resolve this issue in the next few weeks.” 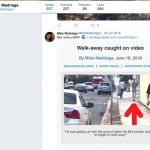 The original story was featured in the print edition of San Diego Reader on June 28, 2018.

On May 26 at around 2 p.m., Onek, a Pacific Beach resident, heard someone crash into her black BMW from inside her Mission Boulevard apartment.

“He (the Bird rider) was on the ground,” she said, “and by the time I got my shoes on and began to go downstairs, he was getting up from the ground where his Bird scooter was and he began to walk away.”

Onek then yelled as he ran northbound past Law Street.

“So I began recording him on my phone,” she said. “He’s the one in the gray shirt on the right and the other guy also on a motorized scooter, that’s his friend.”

She took photos of the crash scene, which shows her passenger side mirror broken off. “I realized there were dents and scratches …..