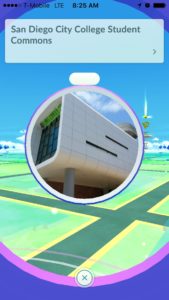 The Pokéstop at the San Diego City College Student Commons building after a player has swiped through on Aug. 30. Players can gain items essential to the game, such as Pokéballs for catching wild Pokémon, berries for your Pokémon and Pokémon eggs that the players walk to hatch.

Pokémon GO has been downloaded by over 130 million people worldwide – two City College students and the campus police came forward to talk about the game.

“I only have to go to the BT building for class, but have found Pokémon spots while I get some food,” said Mike Pagtakhan, a 33-year-old SDSU graduate student who is enrolled in a computer science class at City College. “I am sometimes waiting for a Pokéstop to refresh or I drop a lure at the C store in the MS Building.”

If you could not decipher Pagtakhan’s lingo, do not fret, it is better understood on a virtual level while looking down on the phone.

The game takes the players to an alternative world played virtually on the smartphones utilizing the built in camera and GPS.

The object of the game is to capture Pokémon creatures in “real-world” locations as seen on the phone screen.

The alternative universe is not only filled with creatures, but gyms and stops as well.

“The Pokéstop at the Commons building (by the BT and AH Buildings) is always available to swipe through between classes,” said AngelicaAKB, a City College student who wanted to be referred to by her Pokémon GO screenname. “(Here) players can gain items essential to the game, such as Pokéballs and berries for catching wild Pokémon, eggs that the players walk to hatch. And potions to help heal your Pokémon after battling for a gym.”

Balboa Park, which is walking distance from our campus, is the home to a wide gamut of creatures. Players can locate creatures and other stops by the map on the smartphone via the yellow circles on the app.

Every time a Pokémon is captured, the player’s experience increases, and the more rare the Pokémon, the higher the increments of experience.

“Conversely, the higher the level the player is, the higher CP (combat points) Pokémon he or she can capture,” AngelicaAKB said. 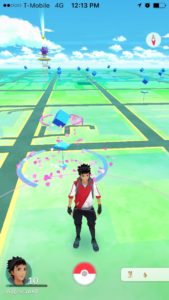 The cherry blossom petals represent a Lure Module that has been placed at the Pokéstop at the City College Student Commons Building in the AH and BT quad on Aug. 30. Lure’s can only be placed at Pokéstops and lasts for 30 minutes.

One’s Poké-prowess can be tested in gyms by battling other Pokémon hunters to a virtual dual – to some, the territorial conquest is of higher importance than just collecting creatures.

At the time that AngelicaAKB was interviewed, she mentioned that the Pokémon Gym located by the City College trolley station was taken over by Team Mystic, which is one of the three teams that players can choose in the game, and their Dragonite.

“Players can battle for these gyms by walking to their location and battling the current gym leader,” AngelicaAKB said.

The game created by Niantic is a hit because it combines what most people do anyway: stare at their smartphones.

“I think Niantic has done what it wanted to accomplish by getting people out, having fun playing a game and getting people to be more active around the world, “Pagtakhan said. “For that, I commend them and say it has been a success.”

Combine a compulsive habit, technology, the ability to interact (virtually as in real-life), sprinkle in some fitness and the adoration for the revamped 1990s gaming and anime series. It all makes Poké-sense for players of the beloved franchise.

But all logical things have it’s negatives.

“As you may know, there have been a number of safety incidents involving individuals playing Pokémon GO,” stated the mass email sent by the San Diego Community College District on Aug. 13.

There were obvious “don’t dos” on the district email like “do not play the game while driving” and “avoid walking in circles while staring at your phone.”

The remaining warnings are reflective of the harsher realities that our campus has.

The A-D-T Building Renovation Project has many portions of the campus blocked off and students or visitors playing the game might disregard the signs or fences in a scurry to get to the next Pokéstop.

Playing the game at night and wondering by the trolley tracks are other potential hazards too.

In other parts of the Pokémon universe, players have been harassed, assaulted and robbed.

– as for City College, “fortunately, we have not had one call for service in regards to anyone on campus playing Pokémon Go,” said Lt. Lou Zizzo from the San Diego City College Police Department. 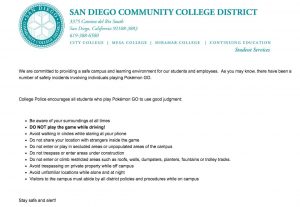 Screenshot of the district email 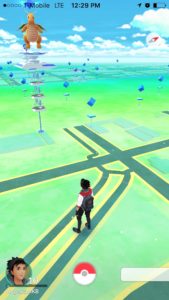 This Pokémon Gym, located by the City College Trolley Station, is taken over by Team Mystic member and their Dragonite. Players can battle for these Gyms by walking to their location and battling the current Gym Leader.