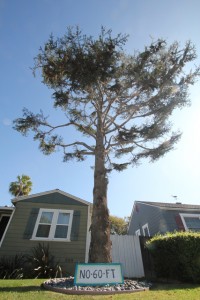 Driving down the streets of Bay Park from Clairemont Drive, all the way down to Linda Vista, one might wonder about particular signage posted on properties throughout the neighborhood. In three months’ time, the aesthetics of the signs have transformed from uneven spray-painted walls to professionally cut and stenciled displays that read: “NO R-44,” “30 FT MAX,” and the most popular, “NO 60 FT.”

“When interested parties understood that the trolley was being located at all four access points along Morena Boulevard, a bit of land speculation ensued and key parcels were purchased,” explains James Lamattery, a local real estate broker. “And when those parties found out that the city would encourage TOD around those stations, and that they might be able to build to 60 feet, it made sense for them to stop construction of any kind until land-use changes were pushed through the planning process and building heights were increased. This is why you see vacant lots or terribly under-utilized lots along Morena.”

TOD is an acronym for transit-oriented development, aka “smart growth,” where housing developments are built on top of retail spots with close proximity to public transportation such as buses, trains, and, in this case, trolley stops that will be built on Morena Boulevard, one by the Clairemont Drive exit where the old thrift shop used to sit for years, and the others at the Tecolote and Balboa intersections. 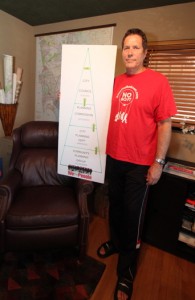 “The owner of this site is Morena, LLC,” Lamattery says, pointing at the Clairemont Drive/I-5 overpass on his map. “They want to go to six stories here; the first two floors will be parking for their residence and parking for trolley patrons. Now, if we successfully block them from going to six stories, then that developer is going to say that he is not going to make enough profit if he is only allowed to go up to three floors [30 feet], then [San Diego Association of Governments] will step in and actually, by eminent domain, buy this portion of the lot, and then turn it into parking for the trolley station.”

Lamattery and his neighbors created a “Raise the Balloon” gathering and website on September 27th: they walked a large red helium balloon, 60 feet in the air, along Morena Boulevard to help all of the residents visualize where the City of San Diego could allow developers to build 4718 new six-story condos in the Bay Park and Linda Vista plan areas.

“That day, I could not see past the red balloon,” says John, an older homeowner on Lister Street. “I paid a lot of money for this property; there is no way I am giving up my view.”

Many of the other homeowners shared John’s sentiments, and understandably so: in certain parts of Bay Park, one can see the Pacific Ocean, the hills of La Jolla, and downtown San Diego.

Lamattery and his almost 500 registered advocates are prepping to take this to the top. Many onboard with the cause are going door-to-door with iPads to have homeowners register their name and address; others are passing out pamphlets with diagrams and maps; and some are on social media, contacting other parts of the U.S. to gain a better understanding of the effects of high-density areas. They are also gathering more information on sustainability and “green” living.

“We are preparing these amendments that will be sent straight to the city council,” says Lamattery. “Basically, we are a social experiment for the whole county of San Diego. Now we can get residents together to create our own amendments. We want our area to be the shining example of how you can incorporate what the city, state, and big money wants, with what ‘residents’ want.”

On the corner of Napier and Goldfield is a big corner house with an equally large “NO R-44” sign. Margie Johnson has been living in her house for 47 years and was a guidance counselor at Bay Park Elementary School just up the street. 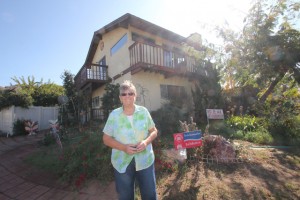 Margie Johnson with her garden

“I am against high density,” says Johnson. “I think it’s wrong. I’m very unhappy with the way that this is going. We don’t need more people [here]. That’s what I want to see,” she says, pointing from her balcony, “the water on Mission Bay, not the back of large buildings.”

R44, also known as RM3-7, are zoning codes that allow the building of 44-dwelling units per space.

On the rear of the Raise the Balloon pamphlet is a map showing many spots south of Tonopah and Morena that the city allegedly wants to change to R44 zones; where 3300 new condominiums, according to the literature, will be built if the zones changes go through.

One of the “community initiated amendments” that Raise the Balloon is initiating is a 30-foot height limit in the Linda Vista Plan area, particularly the large area included in the Morena Boulevard Station Area Planning Study. A portion of that area has no existing height limits, and the concern is that if the city is successful in changing current land use to mixed residential, then there is no telling how high structures could be built. 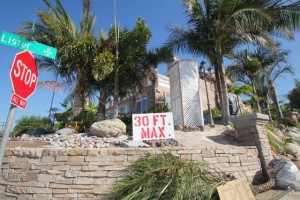