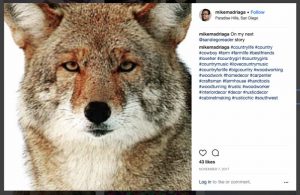 “And the night before [Bella went missing] we heard our dogs barking frantically…. [We] haven’t found her since and starting to think maybe we lost her to the coyotes.”

“We started hearing barking from the neighbor’s dog and then right after that we heard one of their dogs start yelping frantically,” said Angie Lira, “I [then] saw three coyotes; two were walking towards Gables Street and the third one went up Flintridge Drive towards Bolivar Street.”

Lira is a stay-at-home mom from Paradise Hills who saw the coyotes at 1:30 a.m. on Sunday (November 5th). She’s been vigilant since she lost her Pomeranian dog named Bella — last month. “And the night before [Bella went missing] we heard our dogs barking frantically…. [We] haven’t found her since and starting to think maybe we lost her to the coyotes.”

Before Halloween, Jessica from Skyline saw a large coyote walk past her at 5 a.m. as she waited for an Uber driver to pick her up and take her to the airport. She saw the coyote “trotting” on Jamacha Road by Lisbon Street. “I was on my way to a flight so I did not report [the coyote],” she said. “I didn’t know that [coyote sightings could] be reported. I would like to have a way to view activity in my area.”

Jessica was referring to an app/website called Coyote Cacher, which went live in February 2017. Once the user is registered with the app, he or she can update the database with the time and exact location where the coyote was last seen. The other residents connected to the app will then receive a real-time warning on their mobile devices.

“This time of the year is the coyote dispersal season,” said Dr. Niamh Quinn on November 6, “[and] this is when the young leave to find new territories.”

Quinn is a human wildlife interactions advisor for the University of California’s Cooperative Extension program. She was a big part of the development of the Coyote Cacher app/website, which contains an interactive U.S. map, “to explore the number of coyote encounters in the last 30 days.”

“I think it’s extremely important for neighbors to know [about the roaming coyotes],” said Erin Brady. “I have a two-year-old and worry about one bolting out of the bushes.”

Brady is a 41-year-old stay-at-home mother who has seen a few coyotes in the past couple of months by her house on Manzana Way (in Paradise Hills). Lately she’s been “super freaked out” because she said her boyfriend saw one with a small animal in its mouth and her daughter saw one that was the size of a German shepherd.

Quinn said, “There is always an uptick in pet attacks around this time of year [and] it is important to always keep your pets on a short leash and to keep them supervised even in your backyard [because] coyotes can easily scale six-foot walls or fences.” 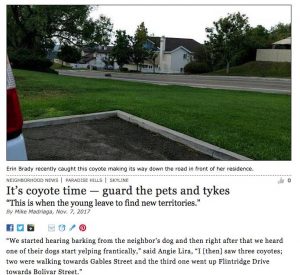 “This time of the year is the coyote dispersal season,” said Dr. Niamh Quinn on November 6, “[and] this is when the young leave to find new territories.”

Angela from Paradise Hills agreed that walls and fences aren’t enough to protect the neighborhood “fur-babies” from the predators. “They were actually in my yard and stole my cat,” she said. “As more and more natural habitat is destroyed, the wild animals seem to migrate into established neighborhoods [and] in the past two years I noticed an uptick in the wild animal population in my yard.”

Many of the Skyline, Paradise Hills, and Bay Terraces residents are taking to social media to warn others of the coyotes roaming their neighborhoods. Unfortunately, the same neighbors haven’t input the coyote sightings on Quinn’s Coyote Cacher map.

There were about ten reports made in San Diego County in the past 30 days, and only one was reported in the Paradise Hills vicinity.

“It is important to report all types of encounters,” Quinn said. “The app is very new [and] it is impossible to analyze trends without good data. This is why a centralized reporting system, such as Coyote Cacher, is so important.”

Published in the San Diego Reader on November 7, 2018