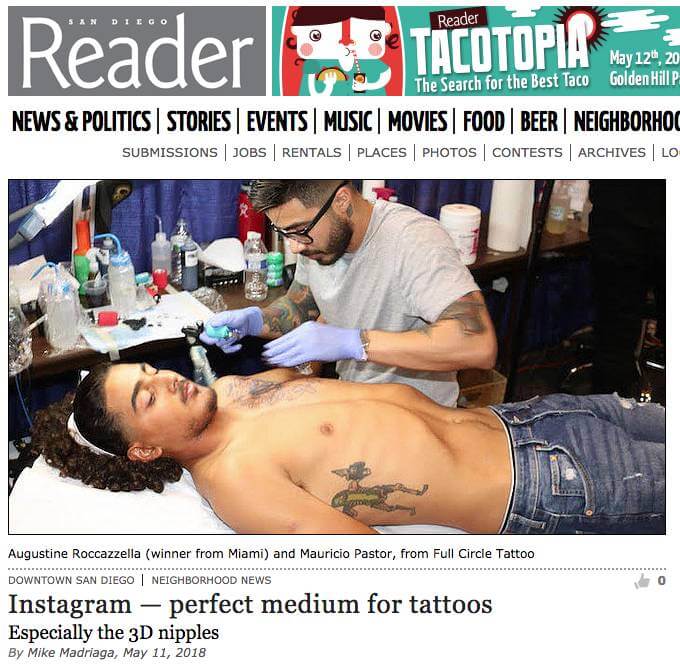 On Cinco de Mayo weekend, a handful of tattoo collectors from around the country received complimentary tattoos at the Golden Hall (inside the San Diego Concourse) on C Street downtown. 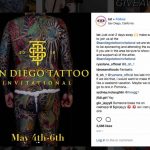 Over 150 tattoo artists from around the world attended the 3-day show.

“We had three winners,” said Andrew Ybarra, “I flew a gentleman and his brother out from Miami; a lady and her husband from New York; and another gentleman from close to Los Angeles, but instead of paying for his flight, we gave him some spending cash.”

Ybarra, 32, and his wife Jessica, flew in from Odessa, Texas, to rendezvous with the winners and their three companions (which were also comped). They and their Tat matriarch, were sponsors of the San Diego Tattoo Invitational held at the Golden Hall on May 4-6.

“I did not believe I won,” Melissa Plant said. “Then, within two days, I had a flight email.” She and her husband were flown in from Albany, New York.

Ybarra manages their Tat brand Instagram page that has 3.1 million followers. His page showcases tattoo art and body modifications. He announced the contest on February 7, and how to participate. 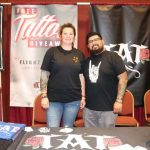 The first requirement was to follow Ybarra’s Tat page on Instagram and the 19-or-so people and/or businesses that the page followed, which were tattoo artists participating in the invitational. The contestant was then asked to like and repost the Free Tattoo Giveaway promo on his or her page. The contestant then had to purchase a T-shirt on the site linked on Tat’s bio on Instagram. “Every $5 you spend gets you 1 entry into the giveaway contest (not including shipping),” said the page. “Example: If you spend $25, you will automatically be given 5 entries into our free tattoo giveaway.”

“We had about 200 entrees,” said Jessica, Ybarra’s wife, “because it was our first giveaway and so many people were skeptical about it.” 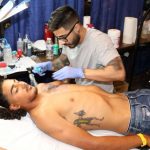 Augustine Roccazzella was the winner from Miami. “I was like eeehhhh at first,” he said, “if I win cool, if not, no biggie.”

He was getting a crab tattoo from Mauricio Pastor, from Full Circle Tattoo (South Park).

Pastor understands the impact that social media has on their business. “I’ve been online since Myspace, before they had the “top 8″ [feature],” he said, “…. working with Tat, I probably gained like 1,000 extra Instagram followers.”

Ybarra’s Instagram page currently accumulates about 100,000 new fans a month, and the monthly number increases like “compound interest.” During the show, he cleared out his direct messages on the app, and it filled back up in three hours. “It stops counting at 99,” he said.

“I wouldn’t be here without Instagram,” he said, “a lot of us wouldn’t be here. Like I said, 50-70 percent of their [tattoo artists] livelihoods depends on social media.” 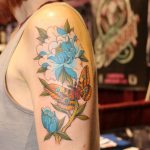 Vaca worked on Plant’s Japanese moth fused with a Peony flower tattoo on her shoulder.

“I love it, and it only took him four hours,” she said.

“Billy, the third winner from up by Los Angeles,” Ybarra said, “got his tattoo yesterday from James Tran. This was his first tattoo and he didn’t tell his mother until Tuesday of this week.”

Before Ybarra flew out to San Diego, he posted a photo of a 3D nipple, an areola pigmentation procedure and a chest tattoo on a woman that had a double mastectomy. 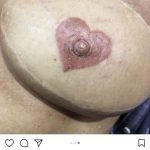 “Instagram is super finicky and you have to be careful because of nudity,” Ybarra said. “You can get shut down and your page goes away forever.”

Kathy Gregg, a hairdresser from Carlsbad, had her procedure photos posted on Instagram — but they were pulled down.

She had cancer in 2014 and said “I had my breasts amputated to save my life.”

Last month, Gregg saw on Instagram that Shane Wallin, from Garnet Tattoo (in Pacific Beach), was providing free nipple tattooing and decorative tattooing to cover up mastectomy scarring, at the tattoo invitational. 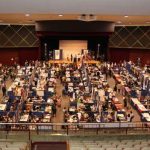 On Cinco de Mayo weekend, a handful of tattoo collectors from around the country received complimentary tattoos at San Diego’s Golden Hall.

Wallin’s booth was next to Ybarra’s booth.

Wallin, 44, has done hundreds of vasectomy based tattoos and 3D nipple procedures, and attains much of his work to Instagram. “Breast cancer support groups get the word out about what I’m doing and posting online.”

Gregg requested that Wallin tattooed areolas shaped like hearts on her, rather than circles. He also provided her with 3D nipples.

“I feel whole,” Gregg said, “I feel like a woman again and it makes me feel pretty.”

Wallin then posted the photo on his IG account, and as of press time, the photos remained live on IG with over 200 likes.

When Ybarra promoted Wallin on his IG, the post garnered over 9000 likes and 55 comments.

“There were men and women that wondered what happened to the nipples and didn’t understand the procedure,” Ybarra said, “so we were educating them.”

…. then, a couple of them were dumb-asses and I just blocked them. I don’t have the time and they’re just trolling and not even trying to be educated on this. I’m super protective of my page.” 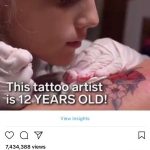 “I’ve got six figures tied up in social media,” he said. “As far as people helping me grow, it was collaborating with other pages. So I would hit up other genres with bigger followings and ask them how much would it cost for them to promote my page, because if they are at 8 million and I’m at 1 million, odds are they are going to be able to help me grow exponentially. Some of them charge anywhere from $200-$300 an hour, and what that means, is they post your promos for one hour, and before they delete it, they take a picture of it and say ‘Here you go.’ But you got celebrities like Kim Kardashian, they charge $50,000-$100,000 a post to promote a brand.”

Ybarra posted a video of a 12-year-old tattoo artist, and it was viewed 7.4 million times. He then posted a red flower tattoo and it garnered 108,197 likes.

The inaugural San Diego Tattoo Invitational conference was created by Bill Canales, the owner of Full Circle Tattoo. Over 150 tattoo artists from around the world attended the 3-day show.

Ybarra is already planning his next IG giveaway for flights to a tattoo show in London. 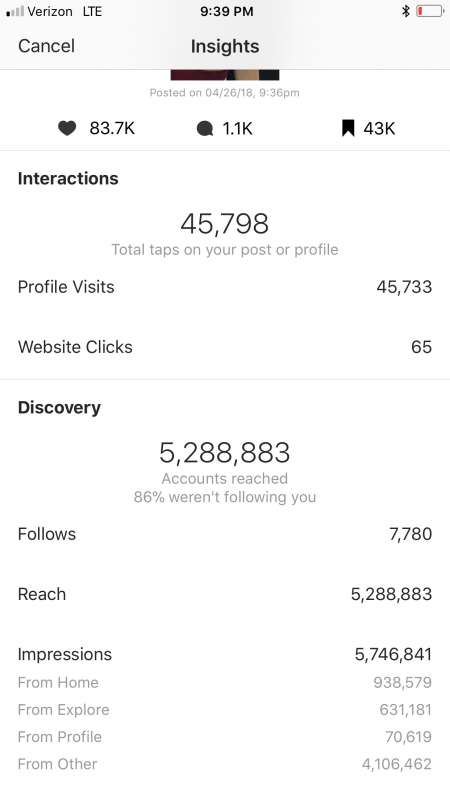