By Mike Madriaga
On July 4, E.L. and his Lakeside neighbors and their horses were not amused by fireworks set off close by. “Idiots on Vista Camino shooting skyrockets towards horses …. anybody else sick of this shit?” E.L. asked his neighbors online; many agreed with his rant and some took it even further. 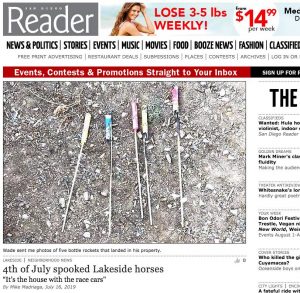 The original story was featured in the print edition of San Diego Reader on July 11, 2019.

“[The fireworks] scared the crap out of the horses and me,” responded a female neighbor. “It’s the house with the race cars …. they had a party. While we were calling the police, along with other neighbors, they started an altercation by kicking a car passing by and all hell broke loose.”

Chris heard the altercation “after 9 pm.”

“I could hear people yelling to knock it off,” she told me on a July 13 interview. “There was swearing then it got really loud and I thought a fight had broken out.”

“When my dog and I got back home from watching the fireworks show in Santee, there were about five sheriff cars in the neighborhood,” Wade said.

“We can handle ourselves, but the poor horses were scared to death and hauled butt down to the bottom of the property,” said Wade’s neighbor. “My husband yelled at them with some choice expletives and they stopped [lighting fireworks] for a bit, then continued shooting the skyrockets over the corrals, so we called the sheriff’s department.” 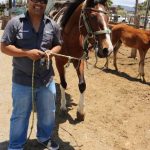 Wade corroborated his neighbor’s story and sent me photos of five bottle rockets that landed in his property that night, adjacent to the property with horses. “Here’s one firework on my roof,” he said, “…. not cool.”

Many residents here at Eucalyptus Hills, a northern section of Lakeside, own horses. Like cats and dogs, many horses dislike fireworks; many panic and become anxious when exposed to explosions, crackles and bright lights. Horses are considered “flight animals” and when they are in distress, they can escape from corrals and potentially injure people and cause damage.

To prep horses for the fireworks, websites suggest the owners expose their horses to music or sound effect tracks that emulate fireworks, and bright lights and disco lights — days prior to Independence Day. 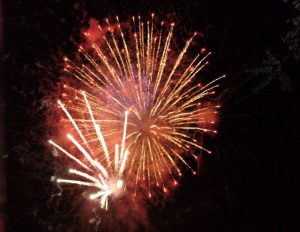 “I love fireworks,” said Suzanne an East County resident, “it’s too bad it’s [difficult] for animals — but improvise and put the animals somewhere safe. I’ve even left the TV on loud or something to distract [them] from the fireworks, just be responsible and not hate on the neighbors that celebrate.”

Some horse owners in Lakeside and surrounding areas that can see and hear the firework shows launched from the Town Center Community Park East in Santee or Barona Resort & Casino have moved their horses to other locations for the night; others opted to sedate the animals.