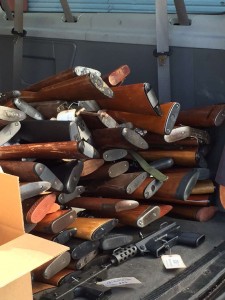 On the morning of Dec. 19, approximately 250 guns were exchanged for skateboards or gift-certificates. Photo Credit: Dennis Martinez

On December 19, at the Bryco building located at 5275 Market Street, Martinez, with fellow skateboarders Harvey Hawks and Neil Carver, were taking in guns as trade-ins for skateboards.

The term “gun exchange” is synonymous with “gun buy-back,” which is confusing to some. An agency, business, or the general public cannot literally “buy back” guns from the police department after they are turned in; rather, the police department, in conjunction with organizations, can offer gift cards and in this case, skateboards, to barter for the guns. Cash has been an option with gun buy-back programs in the past.

“We use ex-gang members and parolees to speak to the youth and share our stories, so that they do not go down the same path.”

On Martinez’s social media, he posted a photo of himself autographing a skateboard for a man sitting in his vehicle, which he captioned, “… fathers turned in their guns for a skateboard, and then we let the kids pick out the skateboard!!!”

San Diego Police Department personnel were the only ones allowed to remove the guns from the vehicles when they pulled up. They carried the guns to a table where they were photographed, tagged, documented, and then secured in a van to be transported to downtown police headquarters.

“The guns are held at the gun desk or property room,” said officer Joshua Hodge from the SDPD. “The serial numbers are then turned into the Department of Justice to check for theft.” If the gun was stolen, the theft victim will be notified to optionally collect his/her property, assuming the victim can still legally own a gun. 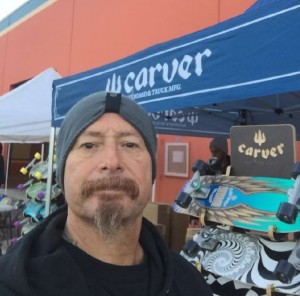 Dennis Martinez and his fellow skateboarders, assisted in the “no questions asked” exchange of 45 skateboards, for a variety of guns.

Since there was a “no questions asked” policy when the guns were turned in, the policy will remain in effect even after the guns are either returned to the legal owners, not claimed, or sent to get recycled or destroyed.

“I am a Second Amendment believer, but I also know that illegal guns are illegal, and to get them off the street out of gang members’ and criminals’ hands is a win-win situation,” Martinez said.

“I believe anybody can create one [a gun buy-back program], as long as they partner in with the proper authorities,” said Officer Hodge. This particular gun exchange was overseen by the SDPD’s Southeastern Division.

The skateboards provided were mostly Carver Skateboards that retail for $299 apiece. The other boards available were Ollie Angel, Loaded, Bustin, and Martinez’s own Flying Aces line, which he started with Jodie Royak and his daughter Cristiana.

Published in the San Diego Reader on December 31, 2015 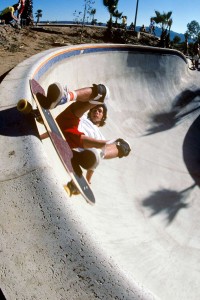 “I am part of skate history that was the [transitional phase between] narrow boards to the wide boards, which was from the early to the mid 1970s … from ball bearing wheels, to precision bearings, clay / steel wheels, to urethane wheels, explained Martinez, “I am a part of ‘The Legend Era.'”
Photo Credit: Jim Goodrich 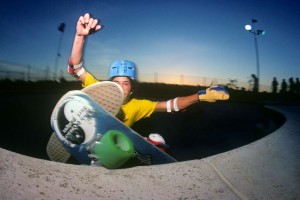 Between the years of 1977-1978, Martinez use to frequent “Skateboard Heaven” at Spring Valley, the “Oasis Skate Park” underneath the 805 freeway, “Skate Ranch” in Del Mar, and parks up north in the city of Marina Del Rey. “These were the most famous, southern Cali, skate parks, home to many skate legends,” said Martinez.
Photo Credit: Jim Goodrich