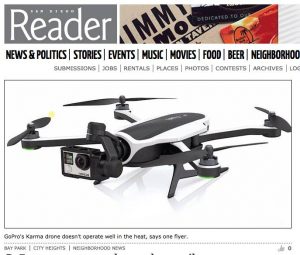 “GoPro is known for cameras, not aviation,” said Sean Randle during an interview shortly after GoPro released a press release on January 8th announcing that it was dissolving its drone-manufacturing arm.

“The [Karma drone] faces margin challenges in an extremely competitive aerial market,” stated the press release. “Furthermore, a hostile regulatory environment in Europe and the United States will likely reduce the total addressable market in the years ahead. These factors make the aerial market untenable and GoPro will exit the market after selling its remaining Karma inventory.”

Randle is a mid-city resident who has been flying drones since 2001. When I called him, he was in Los Angeles awaiting his next flight up to help monitor the fires. He and his drones were also contracted to help locate victims in Mexico City during the September 19th, 2017, earthquake. “No manufacturer has really, in my opinion, gotten beyond a 15-minute job flight,” he said, “so regardless of the technology [it] is still short flight time for commercial work.”

Randle blames the demise of the $799 GoPro Karma drone on their short flight times, “then you have to fly back, too [which cuts into the flight time].” His souped-up APID 5 (gas-powered) helicopter drone that he pilots can stay airborne for up to four hours and it sends back high-definition footage via the CM202G Gas Hound camera to his laptop. “[And] those battery-operated drones [like the GoPro Karma] cannot take the extreme heat up there either,” he said.

Richard Tiland, 36, owns New Evolution Video in Bay Park. He can get 30 minutes of flight time on his DJI Phantom 4 Pro Plus, the GoPro Karma’s nemesis.

Richard Tiland can get 30 minutes of flight time on his DJI Phantom 4 Pro Plus, the GoPro Karma’s nemesis.

“[The GoPro drones] were falling from the sky and unreliable,” Tiland said.

A few Karma owners on the GoPro Karma Drone Owners Group on Facebook agreed with Tiland’s assessment. Some of the 5000 members reported that they lost control of their Karma and they fly away on their own. One member said that they contacted support at GoPro after their drone took off. Support then helped the owner locate the fallen drone through logs and GPS location from the controller. A few others on the forum insured their drones through State Farm for about $36 a month with a $0 deductible but said they cannot make a claim if they were using the drone to make money when it got lost or damaged.

In late 2016, GoPro issued a recall on the Karma after reports were made that the drone would lose power and fall from the sky. The issues were supposedly fixed. Then, on May 22nd, there was that one Karma drone that flew into the San Diego Padres game and crashed into some fans in the stands.

GoPro was founded by Nick Woodman, who graduated from UCSD in 1997. The development of the camera came about to record the surf escapades of his buddies at Black’s Beach before and after class.

According to the press release, GoPro has been reducing its global workforce from 1254 employees as of September 30, 2017, to fewer than 1000 employees worldwide (which also includes their Carlsbad offices). Woodman will reduce his 2018 cash compensation to $1 and they will continue to provide service and support to Karma drone customers.

Many of the GoPro Karma Drone Owners Group remain loyal, though, and are waiting for the prices to drop from $799 to “hopefully $300.”

Published in the San Diego Reader on January 9, 2018 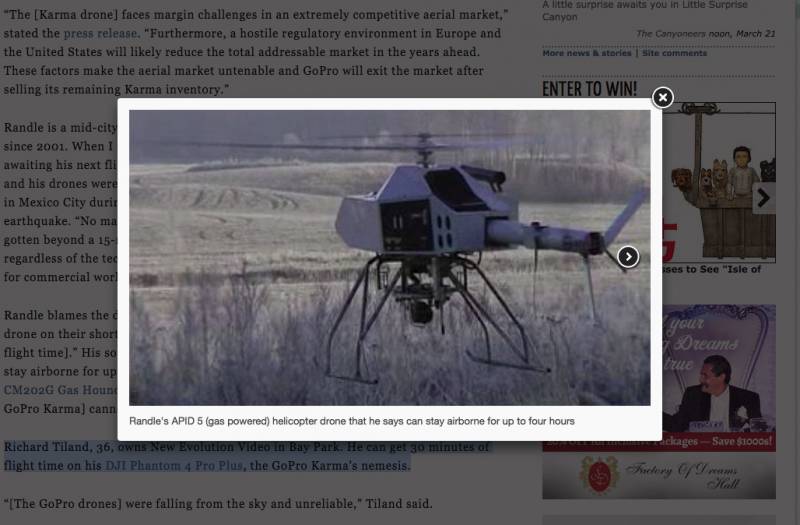