On the evening of Nov. 8, media outlets and government candidate supporters converged at Golden Hall, also known as “Election Central.”

No matter the age, this is where one could watch how our electoral vote worked.

“It was like watching a real-life movie,” said one of the kids who referred to the three massive jumbotron screens. He could also see himself and his parents on the live news.

The local media outlets had booths which lined the surrounding walls of the 23,707 sq./ft. venue. They used the crowd as a backdrop and a weighted-pool of potential interviewees. 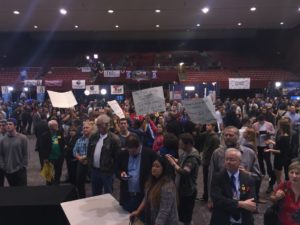 At 8:45 p.m., many looked up to the jumbotrons in disbelief.

Hillary Clinton supporters dominated in numbers here and took most of the camera time during the interviews.

Much of the smaller group of Trump supporters simply smiled as they declined to be interviewed. One 18-year-old, with face paint and all, came forward and said that her fellow Trump supporters remained at their U.S. Grant Hotel homebase a few blocks away.

Some supporters dressed in full regalia with red, white and blue – others still wore their school or Boy Scout uniforms.

The children attended the gathering with their parents or teachers, and learned firsthand the results of our democratic process. They watched the vote results of propositions, measures and political races (local and national) as they were updated via live commentary or info-graphics on the jumbo screens.

As the Trump electoral votes reached 240 – all of the children and their chaperones had left the building.