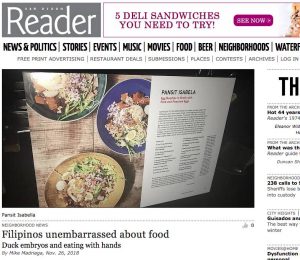 On November 14, a group of Filipino-American chefs cooked their native dishes for about 130 attendees at the DoubleTree Hotel Del Mar to celebrate the I AM A FILIPINO – And This Is How We Cook book signing-and-dinner event.

Nicole Ponseca, formerly of Rancho Bernardo and co-author of the book (with Miguel Trinidad), at the gathering’s Q&A session: “The cookbook is just an excuse,” she said. “The real event here are the eight different [San Diego County-based] chefs that are cooking Filipino food — some cook Filipino food on the regular — and some of them don’t.”

I attended the event with my siblings and our nanay (mom), and observed that most of us were Filipino. I was curious how other foodies perceived our cuisine served in turo-turo (point-point) fashion.

“My favorite dish was Ginataang Puso Ng Saging, banana [heart] salad,” said Rachel, a gym manager from downtown. “At first I was intrigued because I didn’t know what I was eating — noodles, a vegetable? The coconut in the dish brought a familiarity of some Thai dishes but the texture and balance in flavor that was not too sweet was so different than anything I’ve tried. 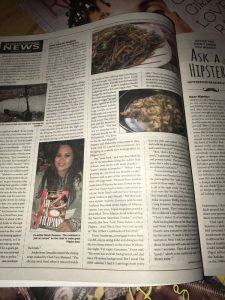 “My least favorite dish this night was the Sinigang Na Hipon (sour shrimp soup), only because I’m not accustomed to the whole shrimp with head [attached] being in the broth,” she said.

Andre from Leucadia enjoyed the shrimp soup cooked by Chef Tara Monsod. “The shrimp was fried when it was not inside the broth so they still had that crunchiness and I thought the soup was sweet (with pineapple) rather than the normal sour taste (with tamarind).”

Andre and I spoke Taglish, a fusion of Tagalog and English, until his neighbor Randy walked up with a fish and veggie dish.

Andre agreed as he bit into his Pansit Isabella (egg noodle in broth with pork and poached eggs).

“Having a filipino food event like this is few-and-far between,” Andre said. “The last one we attended was a typhoon benefit for the Philippines,” he said. “I’ve been to Nicole-and-Miguel’s Jeepney and Maharlika restaurants in New York and it’s a good representation: it’s bringing in a whole new demographics to Filipino food.”

Our “soul food” as described by one of the attendees eating the Adobo Pula Achuete (red adobo with lamb shanks) — “wasn’t always as popular.”

“When I was growing up, our food was literally a joke,” Ponesca said in part in the introduction of their 353-page book, “Howard Stern notably made fun of Filipinos because of what we ate and Fear Factor had to bribe contestants to eat our balut (duck embryo) and dinuguan (pork cooked in pig’s blood).”

Then, culinary experts Andrew Zimmern and the late Anthony Bourdain spoke highly of our cuisine. Last year Vogue magazine posted a story titled: “How Filipino Food Is Becoming the Next Great American Cuisine” and last month, the New York Times listed I AM A FILIPINO – And This Is How We Cook as one of “The 19 Best Cookbooks of Fall 2018.”

Trout Traubman, a mortgage broker from Cardiff enjoys eating balut and dinuguan but the two items weren’t on the menu Wednesday night.

“I’m super-caucasian,” Trout said, “my mom has an Irish background and dad has a Ukrainian background.

There were about seven tables with the chefs and their assistants serving dishes; some were served and prepared on banana leaves. Beside the portions were displays explaining the ingredients, origin of the recipe and how the dish is cooked — per Ponesca-and-Trinidad’s cookbook.

“What’s the one dish with the ground shrimp paste on the side and oxtail over rice?” Trout asked.

“I was mowing that,” Trout said.

Neens was the emcee and event organizer; he put together the “sold-out and one-off” event in three weeks. “I sent out a group text to all of the eight chefs,” he said, “and all the chefs were like “We’re in.””

Previously, Neens promoted the ‘I Love Poke’ and ‘Farm to Turntable’ food events in San Diego.

“…. and that’s what I mean about our chefs being selfless,” Neens said.

“There’s about 25 of us Filipino-American chefs leading kitchens in San Diego [county],” said Evan Cruz, Dimension Development Hotels area executive chef and host chef for the event. “I went to their Jeepney restaurant in New York last month and I saw about 30 patrons with suits and most of them were caucasian. They all ate kamayan (by hand), [which is a traditional style to eat Filipino food], and I was blown away.”

(Ponesca moved from San Diego to New York in 1998 to pursue a career in advertising. She worked her way up in the food industry and together with Chef Miguel Trinidad of Dominican descent, opened Maharlika in 2011 and Jeepney a year later.)

“Amazon, New York Times and LA Times [featured the] cookbook and it’s going to bring the words calamansi (cousins of lemon or lime) and bagoong into more households and expand people’s palettes,” Neens said. “There was a group of people here at the event that said [before Thanksgiving] they were going to do a friendsgiving and everybody was going to do a dish from the book.”

After dinner at around 7:45 pm, a line of about 60 formed to meet with authors Ponseca and Trinidad. The two signed my book and inscribed Maraming Salamat (Thank You) on the inside cover.

On a recent Yelp search with keywords “filipino food”: 244 restaurants in the San Diego County area were found. 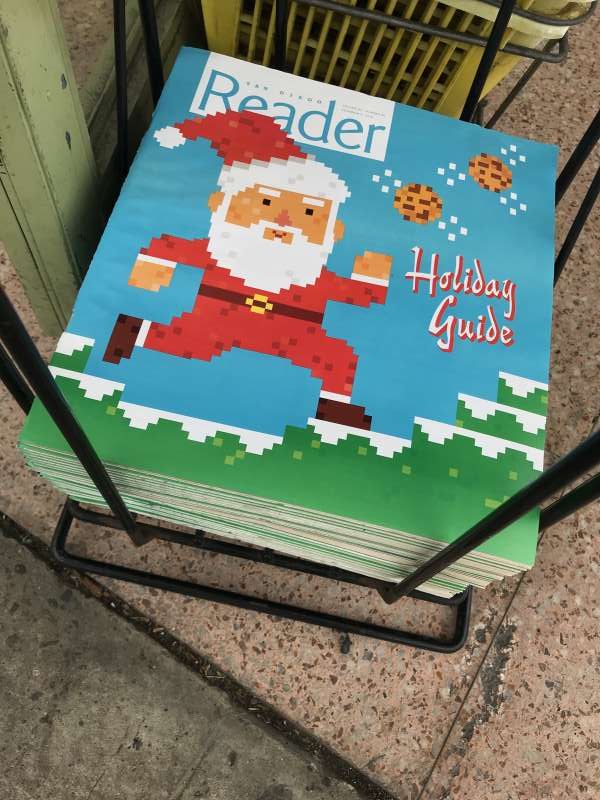