“Dollar-store owners have been stealing our bright orange signs that we spent all night working on,” says Jill K, a retired teacher. “We don’t have them printed like our competitors do.”

Jill says the act of ripping and chucking signage of competing estate and garage sales is pretty common tactic in some areas of town. She has organized estate sales for the past 25 years with the help of her three granddaughters: Kayley, Kendall, and 13-year-old Katrina Kurtchi.

“Grandma, remember when we caught that guy in Allied Gardens with the fake $100 bill?” Katrina yells. 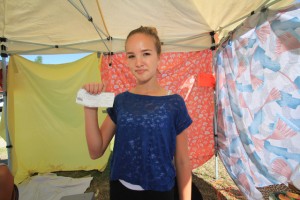 Katrina with the bad check

“The gentleman tried to purchase a safe for half price that day, for $32.50,” says Jill. “After I noticed the counterfeit, he dropped the safe, and skedaddled out of here.” She laughs.

One recent weekend, Jill and her team attempted to liquidate a hoarder’s estate on Mary Lane Drive, near SDSU. Besides the thousands of collectibles scattered throughout the house, they were selling over 3000 articles of women’s clothing in the back patio area.

“When we first came into this house, the clothes were stacked in that rear room past the doorway with the wedding dress hanging; we couldn’t open the door,” Jill explains.

Because of the massive amount of knick-knacks throughout the home, surveillance cameras were mounted and security signs were posted on the windows. 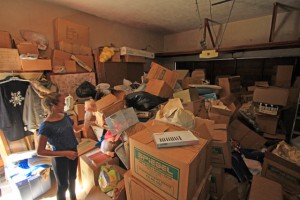 “Last week a guy came up to purchase a five-dollar backpack and handed me exact change, but [he had] stashed a used GPS on the inside pocket,” says Jill. “I told him that I needed 120 more dollars. Then the guy took off after I yelled, ‘Buddy don’t even go there with that, I don’t need your business.””

Jill’s business partner for this estate (who wished to remain anonymous) mentions that cash boxes are always the number-one target of would-be thieves. He shows that their box is bolted down and connected to a cable, in case the burglar is able to rip off the box from the table. “Like Domino’s, we don’t hold much more than $100 at a time,” he mentions as he closes the box.

At a Del Cerro estate, Jill says she was recently robbed of a $250 opal ring by two girls who distracted her, while the third looted. “The item was kept in a glass case with other high-end items,” says Jill. “Shows you how quick these li’l buggers are.”

When asked about her largest sale, Jill mentions an estate at La Jolla Shores last January.

“It took me three days to go through all of the jewelry in the safe. We had Patek Phillipe, Tiffany and Co., Rolex, emeralds, and diamonds. We sold the six-karat diamond ring alone for $105,000.”

Before the sale was made public via Craigslist, the classifieds, and Jill’s 550-count email blast, extra security measures were in place.

“Most of our buyers are wonderful,” states Jill as her and her granddaughter wrap some porcelain dolls they just sold for $75. “It’s just the bad percent that keep us on our toes.”

Jill says she has had to deal with bitter distant relatives gang-busting unannounced or family members who recall a secret stash in the Elvis Presley velvet painting. 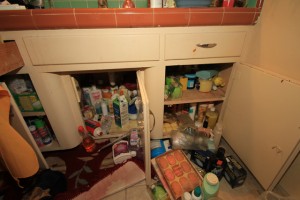 She mentions one of her last estate sales, where she discovered stacks of 20-dollar bills lined inside the couch cushions; she said she immediately relinquished the money (an undetermined amount) to the heirs, the two sons.

The family admits that selling estates has been a great side-hobby for them during the past 25 years.

“When burglars come in, it’s [usually] other family members that heard about ‘Aunt such ’n such’ that passed away, and they remember the sterling silver that she had. And they get a key or come in through a window and feel entitled to it.”

After Katrina and her grandmother pick up what was left of their orange street signs around the neighborhood, they appear to be playing a game of hide and seek, but the peculiar lingering is to ensure that nobody overstays their visit as they close up shop.