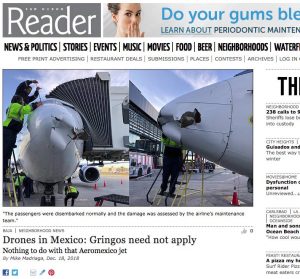 On the morning of December 12, a Boeing 737-800 Aeromexico plane crashed into a drone as it approached runway 09 of the Rodríguez International Airport in Tijuana — according to multiple Mexican news outlets. Photos of the damaged nose-cone/radome of the plane went viral on social media shortly after.

“It would be easy to say: “The drone crashed into the plane so all our drones should be banned,’ ” he said. “But those of us who work with drones will protest and can state that one bad apple doesn’t make the orchard bad.

“Where exactly was the drone at the location of the crash and could it be possible that the drone went out of control?”

The Boeing 737-800 flew in from Guadalajara which took about three hours, then “after the impact, the crew continued their approach and landed without complications,” reported transponder1200.com. “The aircraft followed the terminal, where the passengers were disembarked normally and the damage was assessed by the airline’s maintenance team.

A September 24 El Financiero article breaks down the new drone laws in Mexico that go into effect this month.

A section reported in the article will affect Americans and others: “To obtain the pilot license of the large [drone, you must have] ….. [a] birth certificate or document that accredits you as a Mexican. To operate a micro and small [drone] does not require a license, but you must register it. The registration is free and you can do it online, you will receive the document in ten business days …. in order to register you must have Mexican nationality, be of legal age (otherwise the parent or guardian can do it) and fill out a form.”

On mavicpilots.com, the “leading online community for DJI Mavic drone enthusiasts,” there’s a thread titled “New Drone laws in Mexico–Tourists can’t use drones after 12/1/18.” The first post of 37 reads in part: “If you are coming to Mexico leave your drone at home. First, as a good friend of mine just learned, the customs folks are going through luggage more diligently and they found his two drones, both of which were over a year old but for which he did not have sales documentation to prove the purchase was at least six months ago so he got hit with a 16 percent import tax based upon the price for a new drone in Mexico.”

Diego flies his DJI Mavic drone to cover events and obtain b-roll footage for his news outlet but it’s been a couple months since he flew his drone.

“It seems really strange for us Americans and all foreigners [in Mexico] to be banned [to fly drones in Mexico]. I don’t know about any Americans losing their drones, so far.

Published in the San Diego Reader on December 18, 2018