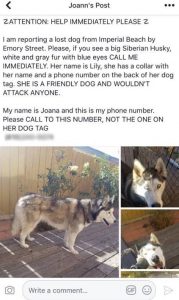 Lily was found behind the Home Depot at 525 Saturn Boulevard, off of Palm Avenue.

“Lily was last seen being taken from our yard on Thursday [February 15] by a caucasian male, medium build, [in his] late 20s to early 30s,” Ivan Kanzaki said. “He then led [our Siberian husky] into Emory Street and then towards Palm Avenue.”

Kanzaki is a 36-year-old Navy reservist from Imperial Beach. He and his roommates, Ryu and Joana, had been looking for Lily since “she was taken with a black belt (not to be mistaken for a leash)” from their house by 10th Street. Kanzaki was out of town for work, so it was up to his roommates to beat the streets and find the dog.

Joana, a 20-year-old Southwestern College student, was tipped off by another husky owner who had recently lost his dog; he said Lily might be close by. She and Ryu were in Chula Vista at about 7 p.m. on February 16 when they received a Facebook message regarding their missing-dog post.

“Lily was [supposedly] spotted behind the Home Depot [at 525 Saturn Blvd off of Palm Avenue],” Joana said.

Ryu, a 25-year-old Navy reservist and SDSU student, said, “We pulled up [at around 8 p.m.] to the dark area in the back of Home Depot,” he said. “I flashed my car lights and sure enough there was the guy with our husky.”

Joana rolled down her window and yelled “Lily!”

Joana comforted Lily in the car after she was rescued.

“It was her, and I ran to her [because] I was so pissed. I was yelling at the guy, ‘Why the hell did you take our dog?””

Ryu had the sheriff’s department on the phone when they pulled up.

“The first thing that [the suspected perpetrator] asked was, ‘Where’s my reward?’” Ryu said. “No, you stole my dog.”

Ryu asked Joana to bring Lily back to the car as the two kept arguing about reward money for “about 15 minutes.”

“As far as I know, you stole my dog and you match the exact description [provided by the neighbor],” Ryu said to the suspect.

Joana said the dog was shaking, hungry, and thirsty.

“Here’s the weird thing,” she said. “When he was asking for proof if Lily was our dog, he showed us three fliers of missing huskies and he was pointing at the rewards.”

“We left and [then] the police got there,” Ryu said. “He’s taking people’s dogs and trying to collect money for them.” 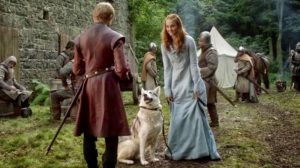 Siberian huskies have shown up in San Diego animal shelters in much greater numbers since Game of Thrones first aired in 2011.

“We know that the huskies are pretty notorious escape artists,” said Dan DeSousa, director of the county’s Department of Animal Services. “They can go over a fence in a lickety-split.”

The roommates disagreed, saying Lily never leaves their yard, even when their wooden fence is left opened.

“There were five Siberian huskies missing in South Bay in the last month,” Kanzaki said. “This is bigger than just our situation. [The perps] clearly did some scouting because our house is in an alley.”

Many are saying that Siberian huskies are more popular because of the direwolves portrayed in the Game of Thrones television series which first aired on HBO in 2011.

“We see that in animal shelters whenever there’s a really popular breed on TV or in a movie. People want to breed them and sell them and make money on them.”

Published in the San Diego Reader on February 17, 2018 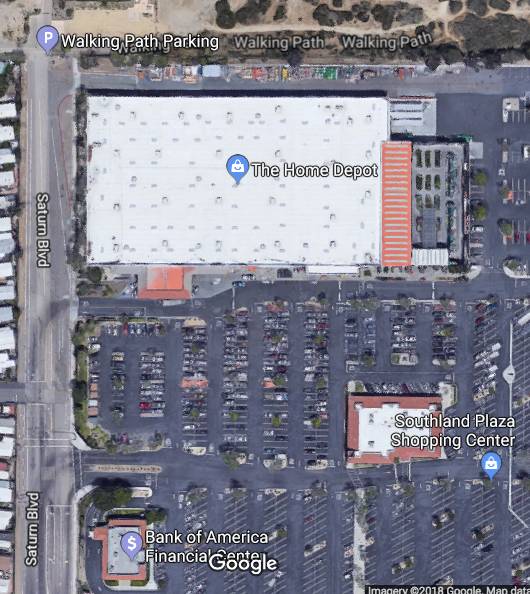