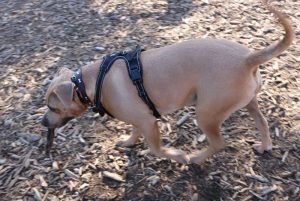 Don Staples’ Stratfordshire bull terrier. “My neighbor only picks up after I see it.”

“[Regarding] the neighbor who threw dog poop on another neighbor’s windshield for not cleaning up after their dog,” said Melissa Popovich, “I can understand why a person would get frustrated enough about it.”

Popovich, 43, from Normal Heights, was referring to two neighbors that recently had a “sticky-situation.”

On May 11, a dog-walker from Cherokee Point, posted on the Nextdoor app that he “forgot to bring the poopy bags” then “oops … the dog pooped.” He said that he hurried back to his car a block away, opened the trunk to find the poop-bag, “he (another resident) then threw the poop on my windshield and ran away.”

Popovich agreed with the poop-slinger and offered advice to the dog-walker. “Come prepared, pick up the poop, [and] stop being lazy,” she said, “knock on a neighbor’s door for a bag.” Her house is by a dirt alley and “people constantly use [it] as a dumping site … [and] people believe it doesn’t require the same responsibility as a lawn or yard does; because it’s an alley.”

Another neighbor, Kristine W., said that “the reaction of the homeowner was the first I’ve seen, he clearly has issues.”

Kristine, 37, who is a senior assistant with a law firm, felt bad for the dogwalker. “His plan was to go back,” she said, “I wouldn’t even take the time to go back. I would just walk that way for the next walk, then pick up poop.” 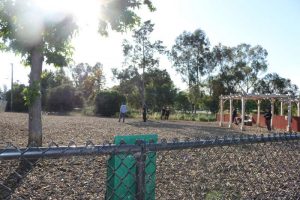 This is a common problem in the surrounding neighborhoods according to Giselle Serrano and her boyfriend, Raul Barba. They both live in North Park and visit the Ward Canyon Dog Park (Normal Heights) with their Frenchie named Remy. “I personally pick up others’ dog poop,” Serrano said.

Barba agrees with the “poop-thrower” because he’s seen a lot of similar confrontations at his North Park apartment and close-by homes. “… especially at night when my [dog-walking] neighbors walk and smoke— some never clean s#it,” he said. (The couple had baggies in hand during the interview.)

Don Staples, from Normal Heights, caught wind of of the story. “I don’t believe that he was going back to pick up the poop,” he said. Staples deals with similar problems at his residence by 33rd Avenue, “my neighbor only picks up after I see it,” he said, “I don’t even allow my own dog (Staffordshire Bull Terrier) to poop in my front yard.”

Many of the residents offered proactive solutions by leaving hints in their yards to forewarn the dog walkers: hand sanitizer, a filled doggy bag dispenser, “PLEASE… Clean up after your pet” signs, and obviously mounted recording devices.

“I took photo evidence of the ‘ish,’ the owner, and dog,” said Pat from Cherokee Point. “It’s simple respect for our neighborhood man; if she [the dog owner] allows it again [and does not clean up] — this will be posted on social media.” She’s upset because her toddler plays in their front yard (when it’s poop-free) but still “not mad enough to ‘chuck a poop-bomb’” at the neighbor, because it could possibly constitute as “an assault.”