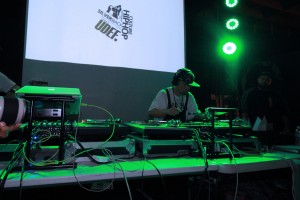 DJ Koco aka Shimokita flew into San Diego yesterday to perform at the Freestyle Sessions World Finals 2-day event held at the World Beat Center. This massive gathering was founded in San Diego 17 years ago by Cros One, and is an ongoing series of b-boy and b-girl dance competitions mostly composed of break-dancing with a meld of other styles.

On this warm November night, the Japan based DJ was spinning his vinyl records for the hundreds of break-boys and break-girls below the stage huddled up in 5 “cyphers,” or makeshift dance circles. Koco is known to spin the very same discs that he discovers diggin’ just hours before at the local thrift shops, and unlike many of the newer DJs who mix with Serato digital devices, analog is Koco’s choice of artistic weaponry. Koco even took his artistry to the next level by beat juggling and scratching on 45s which are almost half the size of 33s (full size 12″ records) which increases his risk of error.   A blunder of such can quickly kill the vibes if the beats don’t come correct, like an Olympic ice-skater who eats it on her final twirl.

Koco spun fast break-beats this night, and looped various tracks which had a heavy disco-esque demure. He also blended some quick Salsa cuts from the 80’s “Nuyorican” Fania All-Star ensemble with generic bass-guitar riffs reminiscent of a blaxploitation track. 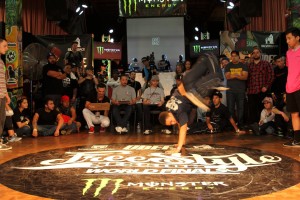 At times it was difficult to pinpoint the exact music that Koco spun, but that is what sets him apart from the rest: his utilization of musical components that were just discovered, similar to the Banana and Mr. Coffee connection to help propel McFly into 2014.

Freestyle Sessions was Hip-Hop in its rawest forms: injured dancers persevering, sweat dripping from graffed up walls, MCs invoking the masses, and DJ Koco lacing up all of the elements via his red and white RCA cables. 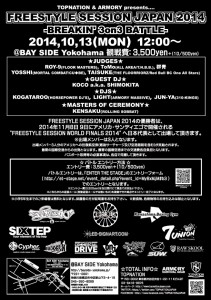 Koco was a guest DJ in the Freestyle Sessions in Yokohama, Japan earlier this year