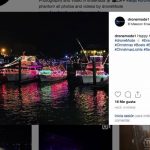 Alfred attended the Desfile de Luces de Embarcaciones y Verbena Familiar 2018 (The 2018 Parade of Illuminated Vessels and Family Event) at the port of Ensenada on December 15-16.

It’s an annual event that had about “25-30 boats” decked in Christmas lights and decor similar to our Parade of Lights on the Bay in San Diego.

“The one that caught my attention was the boat with various reindeers and Santa Clause on the deck,” Alfred said, “that boat had many lights.”

Alfred, a professional drone pilot for Drone Mode, filmed the illuminated boats pass him on the boardwalk and pier where some boats docked to pick up passengers for 50 pesos ($2.50 USD) and cruise around the port of Ensenada — referred to as La Cenicienta del Pacífico (The Cinderella of the Pacific). “They did not allow us to fly our drones that night because there were fireworks,” Alfred said.

On his video posted, boats bearing Christmas lights could be seen coasting by the docked 855 foot Carnival Imagination cruise ship.

Three of the Miss Teen Mundial Baja California beauty queens wearing gowns and jewelled crowns did a Facebook live from the dock. “¡Qué Padre! (How cool!),” commented two of them as they passed a glowing Christmas tree that sat on a boat’s stern.

Not everyone here shared the “cool” Christmas spirit.

“Is there a specific reason why our babies cannot be carried on the boats?” asked a woman regarding the “per discretion of the waterfront authority: ‘Babies carried in arms will not be able to board the boats.'”

“It’s in case of an accident and how are you going to swim with a baby in your arms,” responded another woman.

A man commented : “[This is a] cheap parade with just a few little boats and they call that a parade.”

One of the “saddened” boat decorators responded: “We are putting a lot of effort in the parade and boats today. The purpose of the event is [that the proceeds] help support the elderly residents and the families that visit can have a good time. Blessings to all, including the man who gave a bad comment.”