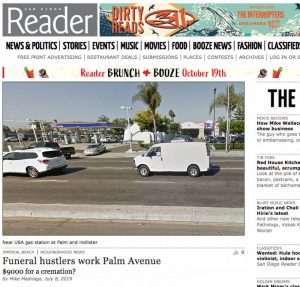 The original story was featured in the print edition of San Diego Reader on July 18, 2019

On June 30, Rick noticed five individuals soliciting for donations on Palm Avenue and Saturn Boulevard at south San Diego — a block west of the I-5.

“I saw a young man with a cut milk container and a photo,” he told me on July 7.

The photograph was of someone that allegedly died recently.

Rick, from south San Diego, said that he’s worked in the mortuary and cremation business since 2001.

“Our price is $1,186.25 with a death certificate and urn, and a burial is less than $5,000,” he said. “I gave him my mortuary business card and said I wanted to help; he looked at it, tossed it on the floor and walked towards other cars …. I wouldn’t have put a thought to it had the guy put my card in his pocket.”

Other reports of the solicitors were posted on the Facebook app.

“I was out there just few minutes ago (on June 30), and he is now with a new sign for a funeral for a baby boy,” commented an IB woman. “Last week was a little girl.”

“The same girl has been needing funeral arrangements for years,” responded a man, “it’s all bullshit.”

On the street view of a Google Map search of Saturn Boulevard, there’s a man, woman and dog standing on the traffic island facing the 99 Cents Only store, with a sign that reads: “Anything Helps Us Thank You.” 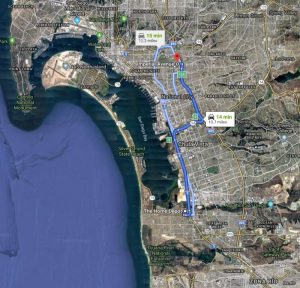 Later on, Rick noticed the solicitors about 10 miles north by the Greenwood Memorial Park and Mortuary. “I [saw] them off of Imperial and the 805, and it made me upset,” he said, “I remembered them [just] being on Palm Avenue.”

“No Mike, it’s not them,” said Rick when I showed him the snapshot. “The [solicitors I approached] hang out in front of the USA gas station next to the 99 Cent store.”

Another resident chimed in and said he saw the same solicitors on Broadway near Costco, which is about two miles northeast from the 99 Cent store. “They’ve been collecting for that funeral for years,” he said.

Later on, Rick noticed the solicitors about 10 miles north by the Greenwood Memorial Park and Mortuary. “I [saw] them off of Imperial and the 805, and it made me upset,” he said, “I remembered them [just] being on Palm Avenue.”

“I once had a male and female show me a prayer card for a dead child they needed to do a burial for, and after giving the man my business card, I noticed the date of death was over a year ago.”

“They target the people with hearts and especially the elderly. I don’t knock people’s hustle — but don’t lie about death.”