He is known as a talented videographer and a photographer by his co-workers at The San Diego Union-Tribune – but don’t take their word for it.

On May 3, David Brooks, a former City College student, was nominated for an Emmy award from the National Academy of Television Arts & Sciences (NATAS).

If he wins, this will be his fourth Emmy.

Brooks, 42, was recently back on campus to photograph a story and to share his experience with journalism students.

“For me as a photographer and an artist, this was inspiring,” Brooks said. “I honestly grew and thrived here at City College.”

He relished the school’s diversity, students of different races, ages and cultures, all trying to get an education.

“It was exciting for me because I lived in the East County,” Brooks said, “and then going to school downtown gave me the opportunity to do a lot of street photography in the area. I enjoyed capturing moments of random people.”

After shooting, instead of going home, Brooks would immediately return to campus and develop his film.

These days, film has given way to digital photography and mistakes can be deleted or fixed with an app.

But Brooks’ early days of working with film — at an average cost of $5 per roll — taught him to plan his photographs, what he termed “pre-visualization.”

As his skills improved, he said his aspirations grew.

He took out a loan to attend the Brooks Institute of Photography in Ventura to study Visual Journalism. 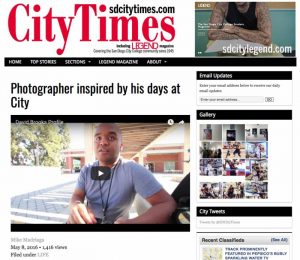 When he found out that his degree required him to take video classes, he complained saying: “I’m a photographer, what am I going to do with video?”

But he embraced video after seeing its potential, and added it to his growing repertoire.

“It’s one thing to see a photo of a person,” said Brooks, “but when you see how they move in their space, you hear the sound of their voice and the way they said something … I think video is a richer way to tell a story.”

Approximately 10 years ago, Brooks was hired at The Union-Tribune as a photojournalist because of his experience with video. This surprised him.

“The newspaper needs still photos from him,” said David Poller, the photo editor at the newspaper, “but the Union-Tribune is more than a newspaper, and for our online component it’s very important that David and other journalists are also able to deliver video.”

“I would describe Brooks’ video style as ‘artistic storytelling,’” said Alejandro Tamayo, another photojournalist and videographer at The U-T. “He analyzes his surroundings, and looks for creative angles to capture his images.”

Tamayo, too, studied at City College, attending classes part time from 1993 to 2001.

In 2013 Brooks won two Emmy awards for his videos, “The Barona Drags” and “Life in the Circus.” Two years later, he took home another Emmy award for a video titled “The Cellist.”

David King, professor of photography at City College, said “success stories” such as Brooks’ underscore the value of vocational programs offered on campus.

Brooks laid the foundation for his artistic and technical skills at City College. The street-photographer turned Emmy award winner is indeed a success story.