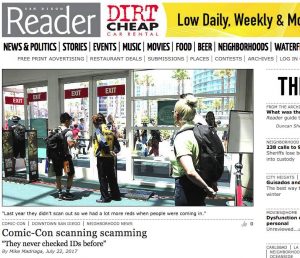 “We had people [trying to come inside Comic-Con] dressed as Elite security wearing black polo [shirts] that said Elite on the back,” said Paulina, “[but] we don’t hire Elite security and then there was one person who said ‘I work for Mrs. Fields, and I said, ‘There is a back entrance that they (employees inside the San Diego Convention center) have to go through.’”

Paulina has heard it all from people trying to bypass the Intellitix scanners located at almost every entrance to the Comic-Con International: San Diego. Although many are innocent people that truly don’t know that they have to have a badge provided by Comic-Con with their name on it— or they are “trying to be sneaky [and illegally access the venue].”

On July 20, at approximately 3:00 p.m., Paulina, a Comic-Con employee wearing a lime green shirt, said that she witnessed “10 red lights” in the last five hours during her watch. She is one of the first employees at the convention who will greet you upon entering the glass doors and the scanners (where a badge must be scanned along one of the four-foot pillars).

To access the venue, after scanning the badge with a RFID (radio-frequency identification) chip embedded inside, the light must turn green. If it beeps and turns red “the first thing that we do is ask for an ID if it does not scan; if they do not have an ID, we [then] ask them to return to their hotel or wherever they are staying to get their ID and they can come back.”

Comic-Con 2016 was the first year that they implemented the Intellitix scanner and RFID system on the million-plus sq./ft. venue. “Last year though, they didn’t put [Intellitix] portals in certain areas like upstairs or the back,” Paulina said, “so when a lot of people were leaving the convention center, they didn’t scan out so we had a lot more reds when people were coming in.”

“If there were no errors and no one in front of me, it was fine. But there was definitely bottlenecking with even a few people,” posted one visitor on social media.

Comic-Con has a system similar to the Coachella Music Festival where “once you scan in the system, it thinks that you are inside, said Paulina. “If I were to take your badge and put it in my purse, then bring it out to one of my friends and they try to come in — they (security) will know and say ‘hey you are already [supposed to be] inside’ and it is going to scan red; that’s how it works.”

Clark, whose name was changed to protect his identity, has been scalping and trading Comic-Con badges, tickets, and wristbands, since the Death of Superman black-bag issue (1993). “Back then it was easy, he said, “I would sit outside [of the convention center] and offer people money for their passes — and most would be like ‘Cool, I ain’t gonna use it anymore anyways.’ But now with all of this high-tech shit — it’s hard to ‘get-over’ [on the system].”

Clark used to dress in costume and buy the used passes on the sidewalks, then he would immediately sell them for more money to another passing by. “They never checked IDs before,” he said.

“And in the past,” Paulina said, “people would be like ‘[first] all five of us will go in and [then] gimme four of your badges, and I’ll take em out for everyone else [to go inside].

“It’s made it a better experience for a lot of people because it’s not so overpopulated, and you can actually walk around and not get trampled on,” Paulina said.

In the last few years, Comic-Con has drawn over 130,000 visitors (inside the venue). But as of lately, there are spectacles outside that draw many visitors.

A few of the visitors on the outside by the IMDb yacht were waiting for an autograph or selfie with Kevin Smith who was filming inside. One dressed in a Wonder Woman outfit said, “I bought passes on Craigslist before, but then it got too expensive, plus [nowadays] there’s a lot to see here [by the water] and across the street [at Gaslamp].”.

“On Craigslist people would post up their (four-day) badges for sale — for $500,” Paulina said, “and then the person that really owns the badge (or the original owner) would say ‘Hey I lost my badge and they can get one reprinted and then the other one (Craigslist purchased badge) is then deactivated; so you can’t have two badges under the same name.”

Before, some Comic-Con scammers photoshopped their badges with different colors to convert their passes from one-dayers to four-dayers, so then Comic-Con implemented hologram stickers (which are no longer used) to combat that.

In the past few Comic-Cons, security would allegedly quarantine groups of people inside the show, and ask for IDs to match the badges; in the last couple of days, no reports were made regarding this type of security enforcement.

Then there are those Comic-Conners who are shameless. “I asked ‘is it your friend’s badge?’ and they answered ‘yeah,’” Paulina said, “I’m like ‘ok you’re not allowed to use it’ so then the security guard will walk him over to the RFID help desk and they kinda police it.

“I just need to make sure that it scans green.”