“I seen about 15 to 20 [cholas] in the park that day,” said Jesse Amaro, after he posted a photo of four girls wearing men-fitted khaki pants walk past him, “you don’t see the chola look very often nowadays.”

Others that attended the 47th Chicano Park Day on April 22, saw many more.

“There are so many people here,” said Christina Solis, an actress who played “Baby Doll,” a chola gang-member in the movie, Mi Vida Loca. “I could never pull that (baggy pants) look off though,” she said, “because I’m super-short. I still love the giant hoop earrings though, they will never go out [of style].”

Solis was referring to some of the attire that many girls were sporting this day: khaki pants, canvas belts, striped and flannel shirts, Nike (Cortez) sneakers, crop-tops, and chola-bands (bracelets). 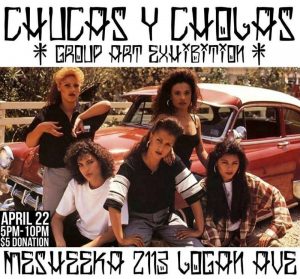 From the Chucas y Cholas flyer. “They went against both cultures, by [dressing in] the pachuca look and then later the chola look.”

“The bracelets were big in the 1970s era,” said Manuel Basabe, “they were a chola-feminist fashion accessory which had five rings looped together connected to the fingers [too].” He sells a retro version for $10 and it comes with 6-8 bands.

The same day, Basabe was hosting the Chucas y Cholas group art exhibition at his business, Mesheeka, which is a block and a half away from Chicano Park, at 2113 Logan Ave.

“These women from our Chicano past were very strong and politicized, and they were a subject of oppression not only from their own culture which has a Catholic misogynistic background but also from the white society who wants all immigrants to assimilate appropriately,” Basabe said. “They went against both cultures, by [dressing in] the pachuca look and then later the chola look.” 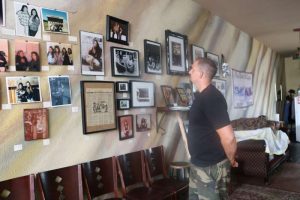 Manuel Basabe: “These women from our Chicano past were very strong and politicized.”

There were over fifty photos and original art posted in his gallery. They were depictions of pachucas from the 1940s to the cholas from the baby-boomer and generation-x sets (1970s-1990s).

Amaro, 35, is a photographer who grew up in the scene in the 1990s. His sisters were cholas from Ventura. “A chola could be a sister or a girlfriend of a homeboy, and in my eyes, they are tough but still feminine,” he said.

One common chola outfit seen this day was a cropped and tightly fitted tee, accompanied with baggy pants that were “cinched or baby-cuffed” on the bottom of the pant leg so it wouldn’t touch the ground when strolling in sneakers or corduroy slip-on shoes.

“We wanted to pay tribute to these strong women who have been through so much,” and have set these huge standards not only for how a strong Chicana woman should be but also [their] fashion.” 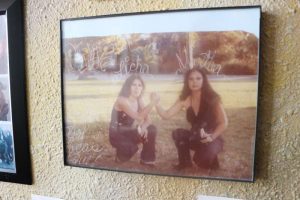 Martha with a friend. “We had the white shadow around our eyes to give them pop.”

Many chola-style clad women from the Chicano Park festivities, came through the exhibition, but Basabe said it’s different “because today you can’t tell (who’s an original chola) because it’s a fashion statement now, and less of a deeper culture with roots. It’s been blurred and is now called cultural appropriation. We wanted to educate and bring awareness to these women and say, ‘Hey it’s ok to love this look and makeup, but you gotta know where it came from.’”

Martha Arechiaga, 54, was from the Latin Angels in 1977. “We had the white shadow around our eyes to give them pop, and we wore Redliners, Hush Puppies, and Wino shoes.”

Basabe said that there were various types of cholas: gang members, college student activists, lowriders, and ones that gave back. “There was a lot of fighting in the 1970s, but the Latin Angels wanted to bring unity down to south San Diego,” he said. 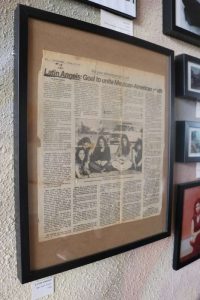 The Star-News featured the Montgomery High School-based Latin Angels in 1978.

An original The Star-News newspaper was on display at the exhibition. It featured the Montgomery High School-based Latin Angels in 1978 and described their “not your stereotype girls’ club” chola lifestyle which encompassed car-washes (to help buy their T-shirts), homeless outreach, and teenagers just being teens. Its headline read, “Latin Angels: Goal to unite Mexican-American youth.”

The evolution of the chola hairstyle was apparent in the gallery photos. The pompadour was popular in the pachuca days, and then the feathered look in the 1970s-1980s. “The ‘copete’ (1990s hairstyle), is until this day, our little trade secret,” said Yolanda “La Grizzly” Castro, from Otay. “We used a lot of hairsprays (to keep the hair up) back then.”

Basabe said that in 2000, the chola presence dwindled, and this made way for the wannabe cholas. “Gwen Stefani from No Doubt has always been under fire for appropriating the chola look,” he said. “Some of these women (in the photos) are no longer here with us – many lived difficult lives in gang fighting, and some were locked up … but that is not what this is about. We are here to uplift others who lived in a similar lifestyle and show that there is a way out.”

Castro said that her generation was the most masculine of the cholas, and perhaps the last. She says that “the internet” was one of the leading causes for the decline of the chola lifestyle. “We all moved on, went to school, and started families,” she said. 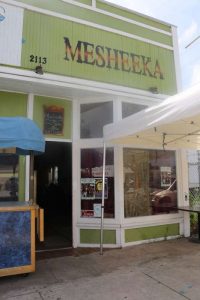 The Chucas y Cholas group art exhibition took place at Mesheeka, a block and a half away from Chicano Park.

“Some of the women (in the photos) wanted their partial anonymity because some work for the county of San Diego and others in law enforcement – and they were gang-member cholas from the 1970s and 1980s,” Basabe said.

Castro is a veterinary technician, Arechiaga works with the San Diego Unified School District, and Solis continues to do community outreach with her co-stars in the Mi Vida Loca movie.

Published in the San Diego Reader magazine on April 29, 2017.