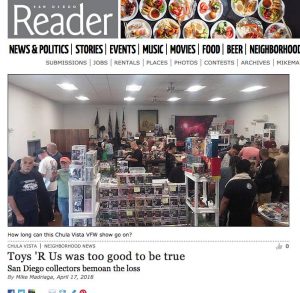 When Toys ‘R’ Us announced that they were closing 800 of their U.S. stores, a handful of San Diego grown-ups that hang out at the Chula Vista VFW, were bummed-out.

On April 15, John was one of 25 toy-vendors that sold at the San Diego VFW (Veterans of Foreign Wars) Toy Show on the corner of I Street and 3rd Avenue in Chula Vista.

Comic books, records, DVDs and collectibles were bought, sold and traded here, between 9 a.m. to 1:45 p.m.

“I still go to Toys ‘R’ Us once a week or so,” said Don Sinclair, “but the shelves are pretty much empty by now.”

Sinclair is the founder of the VFW toy show. He’s been collecting piggy banks and toys since he returned from Vietnam in the early 1970s.

“My buddies are mostly gone,” he said, “I’m surprised that I’m still kickin’ because a lot of guys that I was with, contracted Agent Orange, and some used drugs and stuff like that when we came back.”

About three weeks ago, Sinclair purchased a Johnny Lightning car at the Toys ‘R’ Us on Morena Boulevard by Sea World Drive. 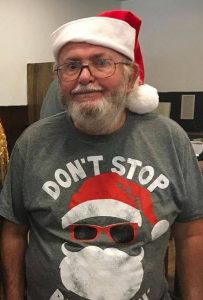 Don Sinclair, founder of the VFW toy show, has been collecting toys since he returned from Vietnam.

“Some of the cars that I bought were factory sealed,” he said, “and they slit open the package, took a permanent marker, and marked over the barcode and said ‘Ok you cannot bring any of the items back.’”

“This devalued the item about 30 percent,” John said.

Collectors like to keep their toys in the original box or plastic wrapping. Once the toy is opened, the price can drop more than 75 percent, especially if it’s on a blister card and bubble, like a Hot Wheels car.

“Damaged or scribbled markings on the package affect the value by about 15 percent,” said a women dealer that was selling Funko Pop dolls.

Richard H. was selling Lego sets. “It’s Toys ‘R’ Us’s store policy, so they destroy the bar code and no one can take it back anywhere, because it’s happened before at other stores,” he said.

“So once they mess up the package right in front of you,” John said, “we cannot return the damaged item. Wowzers!”

Another collector remembers how easy it was to scam the return system back in the late 1990s. “Many dealers would purchase deep-discounted toys or video games at the other stores or at swap meets, and then go to Toys ‘R’ Us and Target, and return the items for credit or cash,” he said. “Others would buy Lego sets, only to take the mini figures, and then return the rest of the set.”

When Sinclair first started his toy show in early 2016, they had seven patrons walk into the doors. Sinclair advertised his toy show via flyers left at Starbucks, business cards taped on laundromat walls, and word of mouth. The walk-in traffic tripled. John created a Facebook page for the show, and George, another vendor, created their Instagram account. The walk-in numbers at this recent show, reached about 125. 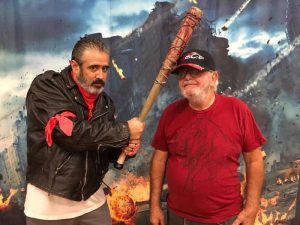 George and Don. “It was common for Toys ‘R’ Us employees to hold items in the back.”

George has been collecting toys since the 1970s. “Certain Toys ‘R’ Us shoppers got aggressive when they knew a shipment of Funko Pops arrived and the exclusive ones were not put out on the shelves,” he said. “It was common for Toys ‘R’ Us employees to hold items in the back.”

In July, 2017, certain Funko Pop dolls that originally retailed for about $15, were sold for thousands of dollars.

Many of the dealers here were reselling some of the items that they just scored at the Toys ‘R’ Us liquidation sale, but were not willing to reveal what it was that they found.

On April 5, eBay released a list of items that can be purchased at Toys ‘R’ Us, and flipped onto the auction website/app for a profit. On that list were select Funko Pop dolls, Lego sets, DJI drone accessories, Cards Against Humanity games, baby items.

“We have few true toy collectors,” Sinclair said, “most of the guys and gals are speculators, and buying and selling to make a living. They are not collectors to me.” 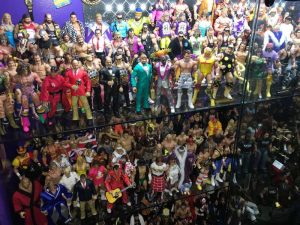 Some of George’s collection

John’s been collecting toys since the 1970s. “I totally remember walking into the Toys ‘R’ Us at Morena Boulevard. I saw about 50 Star Trek Phaser Battle video games in the box. I also saw swivel racks with the new (at the time) blackwall Hot Wheels with a few redline Hot Wheels from 1975 mixed in. Man, I wish I can beam [me back Scotty] back to 1977, and warn Geoffrey about Target, Amazon, and Walmart.”

According to a March 2018 article in the Business Insider: “Toys ‘R’ Us says Amazon, Walmart, and Target discounted toys so steeply over the holidays that the toy chain couldn’t compete. Toys ‘R’ Us relies “exclusively on toys for profit,” whereas Amazon, Walmart, and Target sell a broad array of merchandise to make up for profit losses on toys, the company said in a filing.” 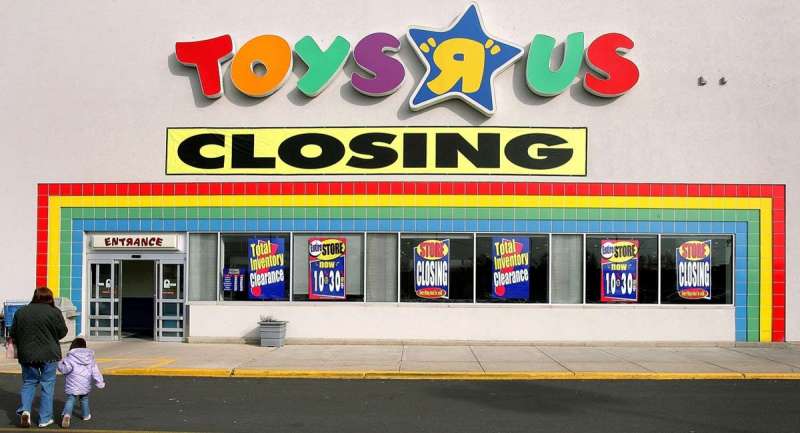 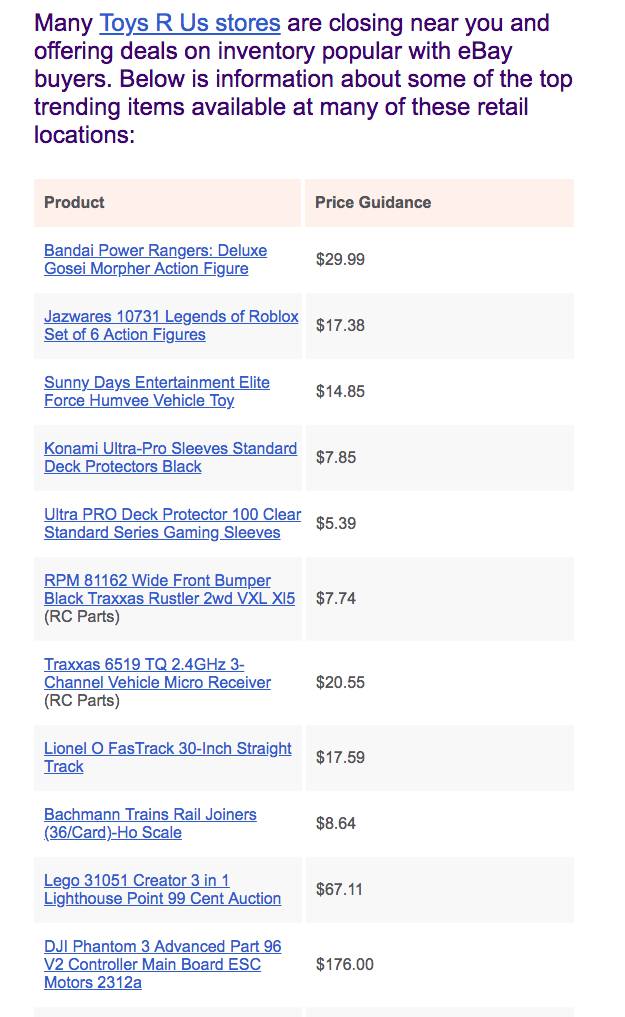