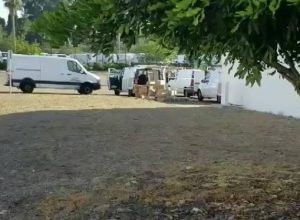 “I’m pulling up [in my unmarked 2005 Chevy van] and people would, like, freak out,” Abraham said. “I would say, ‘Sorry, I work for Amazon,’ and we didn’t even have uniforms [because] they didn’t give us uniforms until 2016…. Amazon is so cheap, they wouldn’t give them [the subcontractor] uniforms; they would make the companies pay for them.”

Lately there’s been a rash of theft in the Chula Vista neighborhoods, from home burglaries to Christmas-mail porch thieves. Although neighbors try to be vigilant, the recent use of unmarked vehicles by FedEx, UPS, and Amazon to deliver parcels makes it harder to ID and nab the Christmas-spirit killers.

“We just want to know who is who,” said Elaine Saunders, a Chula Vista resident. “To be honest, there does not seem to be any set rules at all. Some wear uniforms, some don’t, some have a magnet sign on the side of vehicles and some don’t.”

Saunders monitors her neighborhoods by coordinating with other Chula Vista residents on social media, as they wait for their Christmas gifts to arrive via a delivery vehicle.

Amy, a teacher who lives in Otay Ranch, said, “I think all delivery drivers should be in their company uniform and either drive a company car or at least have some type of logo on their clothing and vehicle to show who they are. It is a safety issue and it helps customers know if they are delivering packages or trying to steal them.”

“Abraham” is a 37-year-old Eastlake resident who delivered Amazon packages starting in 2015 for a Rancho Bernardo company subcontracted by Amazon. He said that he cannot identify the company that cut him “$1800–$2000 checks every two weeks” because he is still close with some of the employees there. He quit driving for them in August.

“I’m pulling up [in my unmarked 2005 Chevy van] and people would, like, freak out,” Abraham said. “I would say, ‘Sorry, I work for Amazon,’ and we didn’t even have uniforms [because] they didn’t give us uniforms until 2016…. Amazon is so cheap, they wouldn’t give them [the subcontractor] uniforms; they would make the companies pay for them.”

Abraham said that throughout 2015 people would be leery of him as his van crept slowly while he looked for address numbers.

“[Later that year] they gave us the Amazon magnet logos for our vehicles and then we got excited,” he said. “Hell yeah, everybody knows we’re Amazon for about two months, [and] then [the Amazon employees] took the logos off at the warehouse because they were having issues and Amazon didn’t want us to do it anymore.” 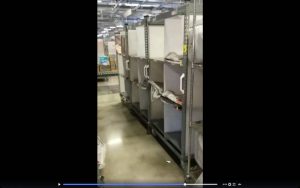 After my interview with Abraham on December 19th, he sent a video of his former place of employment. The video shows him and some of his coworkers in a warehouse loading packages onto metal carts before taking them to delivery vehicles.

In 2016, he got an Amazon uniform: a gray-colored polo shirt and matching shorts, which he tried to keep clean on his 100-mile/ten-hour-long delivery routes. He said that other Amazon subcontractors hook up their delivery crews with jackets during the holiday season, but not his ex-employer.

After my interview with Abraham on December 19th, he sent a video of his former place of employment. The video shows him and some of his coworkers in a warehouse loading packages onto metal carts before taking them to delivery vehicles. Their frustration is evident in what they say: lots of cussing and one coworker said, “A billion dollar company and we have to pull our own shit.”

“I was getting tired of the 300-package counts per day,” Abraham said. Throughout the years he said that the subcontractor gradually increased his and the other drivers’ package counts; the pay remained the same. “If I was getting paid $150 [per day] and I was only doing, like, 80 stops, I would be cool with that, because that’s worth the pay, but if you are talking about 150 to 200 stops a day and you’re only getting paid $13.77 per hour, I don’t think it’s worth it, man.”

Abraham said the subcontractor never gave him a pay raise after almost two years. “I had my own Chevy van, they paid my mileage [50¢/mile], and they told me, ‘You’re capped out at $13.77 [an hour because] Amazon doesn’t want to pay us more to pay you guys more.’”

George, 37, is Abraham’s buddy who still works with the same subcontractor. He has been delivering Amazon packages for the past two and a half years.

“They’ve been giving us different routes daily,” he said. “Everything is staged for us in the morning [with bags and packages] in National City, every morning.”

“[The company moving to National City] helped out a little bit,” George said. “That 40-minute drive to Rancho Bernardo from the west side of Chula Vista was killing me and I ended up going part-time [with Amazon Same-Day services] because it was too much. I was away from the house, like, 14 hours a day.

“Our company said in January 2018 that they will try to give us a 2 percent cost-of-living increase raise. What they did was they implemented a bonus program instead of giving us a raise where they give us an extra $10 a day in order to show up every day that we are scheduled to work. But then there’s a stipulation that you can only get an extra $100 maximum during the pay period even if you worked 12 to 13 days….

“Things have gotten a little better at the new hub [in National City] where we are working at now. The Amazon people there are a little bit better and easier to work with than the Rancho Bernardo location.

Both George and Abraham said that the drivers are trying to get the union involved because, “Us drivers want what’s fair, especially with minimum wage going up and our wages are not going up.”

Published in the San Diego Reader on December 21, 2017