Sew it goes in Normal Heights 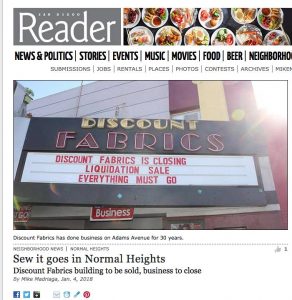 “The reason we are closing is because they are selling the building,” said Jack, an employee at Discount Fabrics (3325 Adams Avenue, between Felton and 33rd streets). “We are not moving, we are closing, and it will take about six to eight months to sell everything.”

Jack has been working at the store for five years. “This building used to be the Adams Avenue Theatre and it was built in [1930],” he said. “The community is going to lose a lot because we are the only fabric store that’s around over here.”

On January 2nd, Dan was shopping for fabric with his wife as I took photos of the hundreds of bolts, buttons, and accessories throughout the 7600-square-foot interior. “It’s disappointing because it’s probably going to be another bar, restaurant or brewery. There’s not enough people around here driving around drunk and we need to sell more beer,” he said sarcastically. “Parking here is already a terrible situation and it will only get worse.”

Dan has lived in Normal Heights his whole life. He recalls in the 1960s when parking on Adams Avenue was plentiful; he also remembers watching The Ten Commandments movie in the same building. “That’s air conditioning venting [up there],” he said, pointing at the swirly decor in the middle portion of the 24-foot-tall ceiling.

The two flights of stairs on opposite walls used to lead to the theater balconies. Now, one side is used to store foam sheets for stuffing pillows, chairs, and sofas, and the other side has a stash of vintage sewing patterns still in their original envelopes. 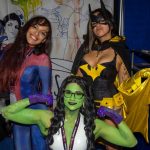 Jack: “…. we sell a lot of fur, and Comic-Con cosplay and steampunk costumes, but Halloween is our number one holiday for sales.”
Suicide Girls at the Comic Con: International
Photo: Alan Hickey

“People think of sewing as a grandpa-and-grandma thing,” Jack said. “On the contrary, a lot of young kids are starting to sew. I guess it’s something to do other than computers, tablets, or phones, and a lot of our schools are not able to have the wood, metal, and sewing shops anymore.”

Jack said the store’s had a 35 percent increase in sales during the past three years.

“Our business is sustained by different things, including the African, Russian, and Latin communities. And for Christmas it’s not that big, but we have Burning Man, [during] which we sell a lot of fur, and Comic-Con [cosplay and steampunk costumes], but Halloween is our number one [holiday for sales].” Much of their sales Jack attributes to interior designers who purchase upholstery fabrics in vinyl and leather and foam. 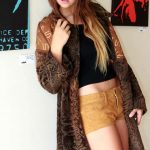 Jack: “And for Christmas it’s not that big, but we have Burning Man, during which we sell a lot of fur ….”

Brittany, a shopper, said, ”They have deadstock that you don’t normally see, and it’s not commercial. It kinda brings the fabric-district vibe to Normal Heights, which I don’t think San Diego really has.”

“It’s been a fabric store for 30 years,” said Dorothy, one of the Discount Fabrics sales reps. “Our boss took over 15 years ago, and before that it was different venues: it was a church at one time, a VFW post, and you’d be surprised at how many customers come in and say that they remember when it was a punk club [in the 1980s].”

Published in the San Diego Reader on January 4, 2018 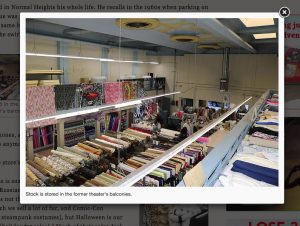 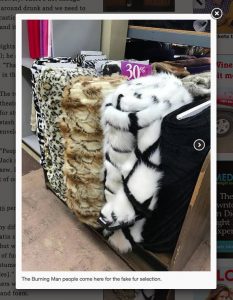 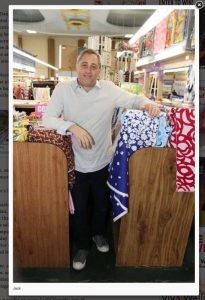