A crow sanctuary in North Park 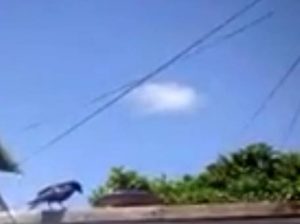 Low-rez photo of Gomez. “I don’t feed him that much, he has to come and ask.”

“So her macho boyfriend took it upon himself to run out, get a gun of some kind,” said Kay Marsik, “and then he bragged to me that he had killed five of them [crows].”

Since that incident, Marsik, 61, from North Park, has been taking care of the remaining crows in her area (the ones that fly into her yard). She named one crow “Gomez,” after the father on the Addams Family movie and TV series. “Gomez (who) is very black and beautiful,” still flies into her yard to eat the cat food that Marsik puts out. The other crows don’t come as frequently.

Marsik wasn’t specific about the time of the alleged killings, nor did she report such to the police, but she did say that her anti-crow neighbor and his girlfriend recently moved. “When they were moving and he was in his driveway, about four to five crows surrounded him screaming and dive bombing him. He was shooing them [away] with a broom. That’s when my interest was seriously piqued, and I started researching crows and how smart they are.”

Last week, Marsik posted about her relationship with Gomez on her social media.

“I think I’m seeing him more recently,” she said, “I’ve been spending more time in my kitchen that faces the fence.”

Marsik’s thread lit up. Most of her close-by neighbors agreed that the crows are intelligent, they do not forget faces, and they bring gifts. One neighbor shared a video of a crow that brought an eight-year-old girl many gifts.

Marsik is an accountant by trade, and to break the monotony of numbers crunching, she watches Gomez and talks about her friend online. “When I talk to him; he faces me, watches me and tilts his head,” she said.

“Crows are smart,” said Carlos Garcia, “but you need to be careful.” He’s been working with birds for three years at the Arrieros Pet Shop on Imperial Avenue.

Other residents in Marsik’s vicinity are not happy with crows; stating that they are loud, they defecate on their porches and are killers themselves.

“[I] hate to be that person, but [I’m] NOT pleased with the crows around here,” said a Cherokee Point neighbor. “They drive the song birds away and gang up and attack our falcons in the area. They are known to attack and eat smaller birds, (I saw a pigeon in its talons once), and are egg thieves.”

Another lady from Hillcrest said that Marsik is messing up the “natural balance, which creates problems for other species and between neighbors.”

Garcia agreed with Marsik’s concerned neighbors and said that because of the size of the crow’s beak, they kill smaller birds and mice – “easily.” He also has a soft-spot for them and knows others who have befriended them as Marsik.

“I don’t feed him that much, he has to come and ask.” Marsik said, “or when I think about it, I whistle for him.” She added that she doesn’t care about neighbors being upset with her, Gomez and friends; “we have a very few crows where I live down here.”

Garcia did mention one thing that wasn’t spoken about on the threads. “I have heard about people using crows for rituals to clean other people.” 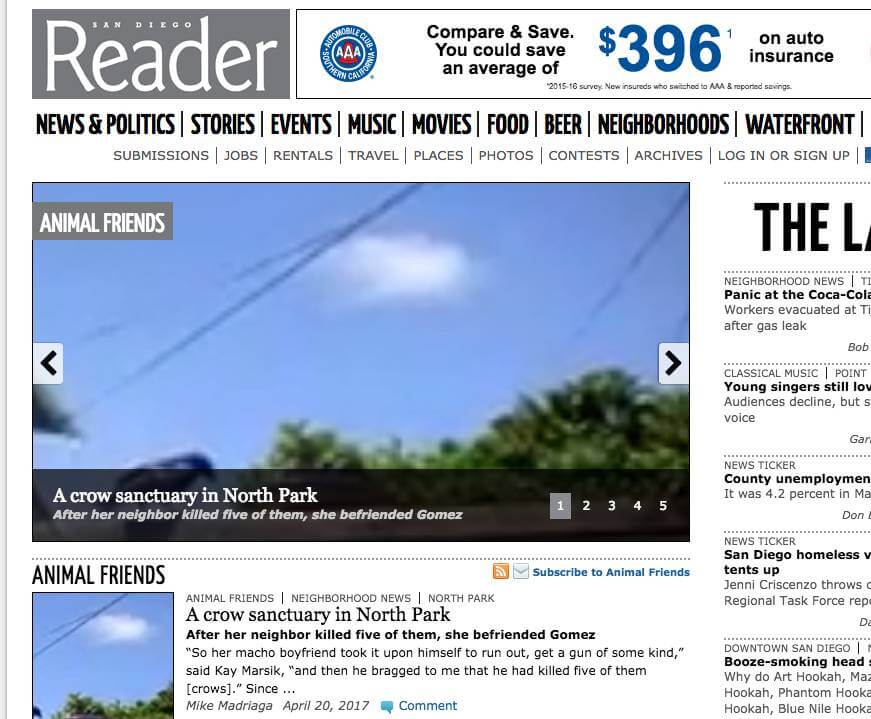 After her neighbor killed five of them, she befriended Gomez