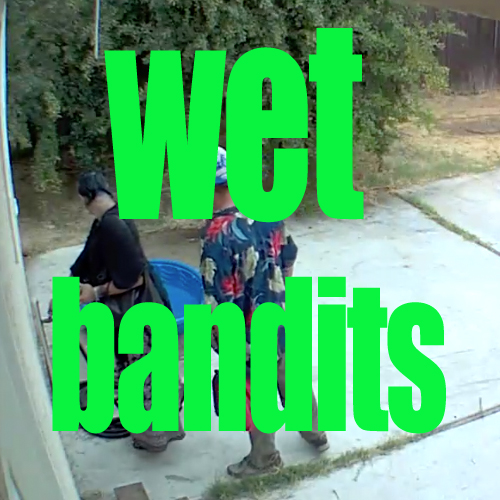 “The guy in that screen shot looks like one of the ‘wet bandits’ in the other video,” Mary said to me on a September 20 interview. “Multiple people believe it’s the same guy and they have seen him trespassing and snooping.” 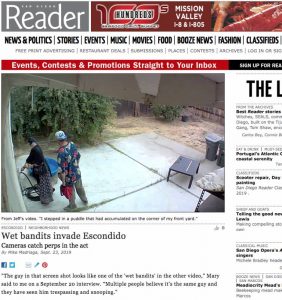 The original story was featured in the print edition of San Diego Reader on Oct. 3, 2019.

Mary, 42, is a former fire department employee from Escondido. She said the man caught on her neighbor’s Ring doorbell and camera device wasn’t putting out fires when he and his accomplice allegedly opened faucet spigots throughout the neighborhood — they had other plans.

“Initially, someone attempted to steal my neighbor’s Ring camera,” Mary said, “but they only got away with part of it.”

Ring then sent Mary’s neighbor a replacement part which was immediately installed and activated.

“Then at 4 am the next morning (in early Sept.),” Mary continued, “the thief got away with the whole camera this time around — which is the screen shot you saw, Mike. I [found] him and his friends hanging out at a local fast-food place, then we called the cops; they confirmed he matched the screenshot, and he still had the Ring camera on him and gave it back to our neighbor.”

Another neighbor recognized the perp from when he rang his doorbell, then asked if a non-existent “Stan” lived in the house.

“I think they go door to door to see if people are home, then [if not, they] try to come in,” Jeff S. said.

On Sept. 10 the “wet bandits” visited Jeff’s Escondido home, then made their way to his backyard.

“I was alerted when they went to my house, so I headed home,” he explained to me on September 20, “but, by the time I got there, they were gone.” 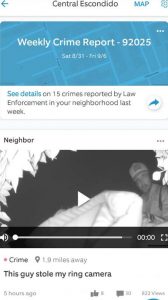 Jeff, a 35-year-old aircraft mechanic for the Navy and Marines, called the Escondido Police Department and then watched the incriminating videos caught by his cameras. “I have an ADT alarm for the inside of the house, so they didn’t go in,” he said. “Other than picking unripe fruit from the tree, they didn’t take anything.”

Jeff’s “breaking and entering” video footage, depicts the male perp wearing a colorful “Spicoli (from the Fast Times at Ridgemont High movie) looking Hawaiian shirt.” His woman accomplice was described to be wearing “a long and vintage looking House on the Prairie style skirt.”

“By the time I got home, the pool was full so I just emptied it out,” Jeff said. “Then I hear this strange noise and when I followed the noise, I stepped in a puddle that had accumulated on the corner of my front yard — they also turned on my front yard water hose.”

A resident that lives less than a mile southeast from Jeff’s house watched the videos online. “There was a woman that did that to us multiple times near Rose Street,” he commented. “She would turn on the hose and leave …. not sure if it’s her, but seems like a unique thing.”

Another neighbor came forward after she saw Jeff’s videos. “My mom’s hose was on when I got here,” she said, “and no one was home.”

The nickname “wet bandits” is derived from the 1990 Home Alone movie, where the two burglars played by actors Joe Pesci and Daniel Stern — would purposely leave the faucets running in their victims’ homes, after they burglarized the homes.

Jeff has since added locks to his fences. “I noticed that on the comments underneath my videos, these people have been doing this for a long time,” he said. “I’ve been living here for seven years and have had multiple people come through my house, a couple of times I was actually home and as soon as they heard me — they took off. It’s getting worse.”

“Our neighborhood in particular has had an increase in transients, suspicious people and criminal activity, recently,” Mary said. “People coming and going from a house with extra bikes and bike parts, and stolen packages; the house next door was broken into a few times. This increase though, seems to be a younger generation and they seem to be more involved in drugs.”

JG agrees with Mary. “Where are all the homies [at]?” he said. “Ever since the hood started dying off — we started getting a lot of tweakers and other things.”